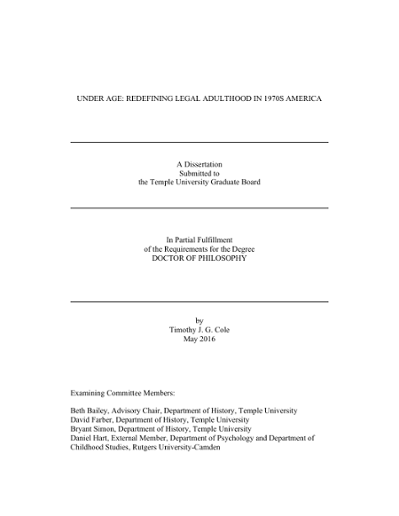 Between the late 1960s and early 1980s, state and federal lawmakers made a number of unprecedented changes to the minimum age laws that define the legal boundaries between childhood and adulthood in the United States. By altering the voting age and the legal age of majority during the early 1970s, legislators effectively lowered the legal age of adulthood from twenty-one to eighteen, and launched a broader, more wide-ranging debate over other minimum age laws that would preoccupy legislators for much of the decade that followed. These reforms can be grouped into two distinct stages. Early 1970s reforms to the voting age and age of majority placed a great deal of faith in eighteen- to twenty-year-old Americans’ ability to make mature, responsible decisions for themselves, and marked a significant departure from the traditional practice of treating young people as legal adults at the age of twenty-one. During the late 1970s and early 1980s, however, a second set of reforms revoked much of the faith that legislators had placed in the nation’s young people, raising some key minimum age limits – such as the drinking age – and expanding adults’ ability to supervise and control teenaged youth. This dissertation analyzes political and public debates over the legal boundaries between childhood and adulthood during the 1970s, focusing in particular on reforms to the voting age, the age of majority, the drinking age, and the minimum age laws that regulate teenagers’ sexuality. It seeks to explain how and why American lawmakers chose to alter these minimum age laws during the 1970s, and how they decided which age should be the threshold for granting young people specific adult rights and responsibilities. The dissertation suggests that legislators often had difficulty accessing information and expertise that they could use to make well-informed, authoritative decisions on the subject of minimum age laws. Instead, they often based their choices on broader public images and perceptions of the nation’s young people, and on their subjective experiences of interacting with American youth. Throughout the 1970s, a wide range of lawmakers, activists, and interest groups – including many young people – sought to control the legal boundaries between childhood and adulthood, both by lobbying lawmakers directly and by trying to alter public images and perceptions of the nation’s youth. During the early 1970s, some young activists, liberal lawmakers, and interest groups met with considerable success in their attempts to grant young people greater adult rights and responsibilities at earlier ages, successfully framing eighteen- to twenty-year-old youth as mature, responsible young people who were quite capable of shouldering adult rights and duties. But these positive perceptions of young people were short-lived. By the mid-1970s, they were being supplanted by much more negative and unsettling images of young people who were thought to be exhibiting “adult” behaviors too soon, and were portrayed as being both in danger and a danger to American society. As a result, lawmakers became increasingly focused on protecting and controlling young people in their late teens and early twenties, and on drawing clear, firm boundaries between childhood and adulthood. These shifts demonstrate that images and perceptions of American youth played a key role in shaping 1970s reforms to the legal boundaries between childhood and adulthood. Rather than the product of a sober, careful evaluation of young Americans’ capacity to make responsible decisions for themselves, these reforms were often the product of adult Americans’ visceral, emotional responses to shifting public perceptions of the nation’s youth.