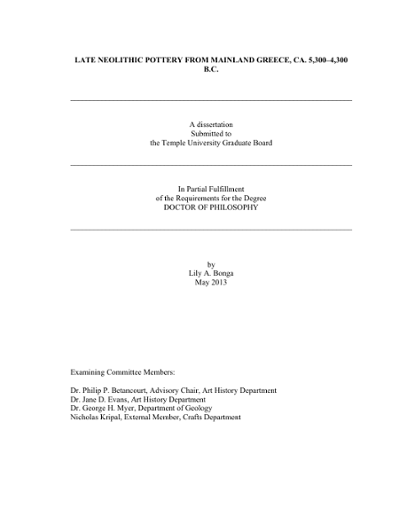 The Late Neolithic (defined here as the LN I of Sampson 1993 and Coleman 1992) is both the culmination and the turning point of Greek Neolithic culture from the preceding phases. It lasts some 1,000 years, from approximately 5,300 to 4,300 B.C. The ceramic repertoire of the Late Neolithic period in Greece is a tremendously diverse body of material. Alongside this diversity, other aspects of the ceramic assemblage, such as Matt-painted and Black-burnished pottery, share broad similarities throughout regions, constituting a "koine." The commonalities, however, are most apparent during the earlier part of the Late Neolithic (LN Ia); in the later phase (LN Ib) phase, more regional variations proliferate than before. In the Late Neolithic, all categories of pottery--monochrome, decorated, and undecorated--are at their technological and stylistic acme in comparison with earlier periods. While some of the pottery types demonstrate unbroken continuity and development from the preceding Early and Middle Neolithic phases, new specialized shapes and painting techniques are embraced. For the first time in the Neolithic, shapes appear that are typically thought of by archaeologists as being for food processing (strainers and "cheese-pots"), cooking (tripod cooking pots and baking pans), and storing (pithoi). More recent research, however, has demonstrated that these "utilitarian" vessels were more often than not used for purposes other than their hypothesized function. These new "utilitarian" vessels were to dominate the next and last phase of the Neolithic, the Final Neolithic (also called the Chalcolithic, Eneolithic, or LN II) when painted pottery disappears from most Greek assemblages just before the beginning of the Bronze Age. During the past two decades, there has been much research into Late Neolithic Greece, particularly in Northern Greece (Macedonia). This dissertation incorporates the most up-to-date information from these recent excavations with the older material from sites in Thessaly, Central Greece, and Southern Greece. Since this study draws solely upon published material, both old and new, there are certain limitations to the type of analysis that can be performed. The approach, then, is more of an art-historical and historiographical overview than a rigorous archaeological analysis. It provides an overview of the major classes of pottery (decorated, monochrome, and undecorated) and their primary shapes, motifs, and technological aspects. While it emphasizes commonalities, regional and chronological variations are also highlighted. The technological means of production of vessels, their use, circulation, and deposition are also considered. The structure of this paper is that each pottery chapter is devoted to a broad class (such as Matt-painted), which is broadly defined and then more closely examined at the regional level for chronological and stylistic variations. Likewise, a sub-section then discusses the technology of a particular class and its regional and or chronological similarities and differences. When necessary, outdated scholarship is addressed and rectified.