MOLECULAR PHYSIOLOGY OF THROMBOXANE A2 GENERATION IN PLATELETS 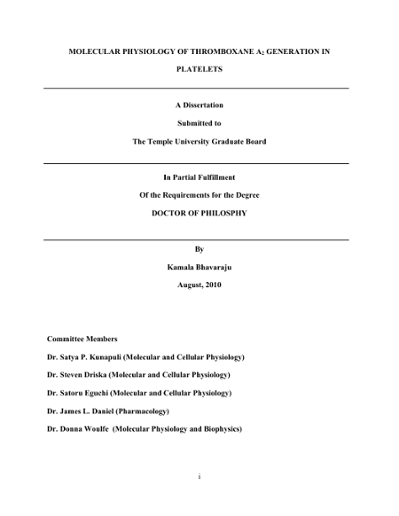 Cardiovascular diseases are a major cause of mortality and morbidity in the developed countries. Anti-platelet therapy is a cornerstone treatment for patients with cardiovascular diseases. Patients are routinely managed with a combination therapy consisting of aspirin and clopidogrel. Aspirin inhibits cyclooxygenase 1 (COX 1) a crucial intermediate enzyme involved in thromboxane biosynthesis. Clopidogrel on the other hand antagonizes ADP receptor P2Y12. ADP is a weak platelet agonist stored in platelet dense granules and is released upon platelet activation. ADP activates platelets through two purinergic receptors namely P2Y1 and P2Y12 these receptors couple to Gq and Gi class of G-proteins, respectively. P2Y1 causes calcium mobilization through activation of PLC-β. P2Y12 inhibits adenylyl cyclase, causes activation of Rap1B and Akt. Signaling from both the receptors is required for complete integrin activation, thromboxane generation and Erk activation. Previous studies have shown that P2Y12 potentiates fibrinogen receptor activation, secretion, thrombi stabilization, thrombin generation, platelet leukocyte aggregation formation. ThromboxaneA2 (TXA2) is a potent platelet agonist generated through arachidonic acid metabolism in platelets. TXA2 thus, generated after platelet activation acts as a positive feedback mediator along with ADP. Under physiological conditions, platelet activation leads to thrombin generation through coagulation cascades. Generated thrombin activates PAR receptors and ADP is released from dense granules, which further potentiates thromboxane generation downstream of PARs. Current anti-platelet therapy regimens often include P2Y12 antagonists and aspirin in management of patients with acute coronary syndrome (ACS) and in those undergoing percutaneous coronary intervention (PCI) with stent implantation. However, there still exists a need for improved treatment strategies as not all patients benefit from this dual combination therapy. Reasons include, poor responders either to P2Y12 antagonists or to aspirin, or if aspirin is contraindicated in these patient populations. In the current study we evaluated the role of P2Y12 in thromboxane generation under physiological conditions. We studied serum thromboxane generation in a model system wherein P2Y12 was antagonized or deficient. Using pharmacological approaches we show that dosing mice with 30mg/Kg/body weight clopidogrel or 3mg/Kg/body weight prasugrel decreased serum thromboxane levels when compared to the control mice. Pre-treatment of human blood ex vivo with active metabolites of clopidogrel (R361015) or prasugrel (R138727) also led to reduction in thromboxane levels. We also evaluated serum thromboxane levels in P2Y receptor null mice, serum thromboxane levels in P2Y1 null mice were similar to those in wild type littermates, and were inhibited in P2Y12 null mice. Furthermore, serum thromboxane levels in P2Y12 deficient patients, previously described in France and Japan, were also evaluated and these patients had lower serum thromboxane levels compared to normal controls. In a pilot study, serum thromboxane levels were radically reduced in healthy human volunteers upon dosing with clopidogrel, compared to the levels before dosing. In conclusion, P2Y12 antagonism alone can decrease physiological thromboxane levels. Thus P2Y12 regulates physiological thromboxane levels. Further it is known that ADP-induced thromboxane generation is integrin-dependent. However it is not clear if other potent platelet agonists like thrombin require outside-in signaling for thromboxane generation. Our results show that thrombin-induced thromboxane generation was independent of integrins i.e. when platelets were stimulated with PAR agonists in presence of fibrinogen receptor antagonist thromboxane generation was not affected. Since PAR agonists, unlike ADP, activate G12/13 signaling pathways. Hence, we hypothesized that these pathways might play a role in TXA2 generation. Our results show, that inhibition of ADP-induced thromboxane generation by fibrinogen receptor antagonist SC57101 was rescued by costimulation of G12/13 pathways with YFLLRNP. This observation suggested an existence of a common signaling effector downstream of integrins and G12/13 pathways. Next, we evaluated role of three potential tyrosine kinases; c-Src, Syk and FAK (Focal Adhesion Kinase) that are known to be activated by integrins. Our results showed that c-Src and Syk kinase did not play a role in ADP-induced functional responses in platelets. We observed differential activation of FAK downstream of integrins and G12/13 pathways. ADP-induced activation of FAK was integrindependent and SFK-independent. On the other hand selective activation of G12/13 pathway lead to FAK activation, in SFK and Rho dependent manner. We also evaluated specificity of new FAK inhibitor TAE-226 to understand the role of FAK in TXA2 generation. Our results showed that TAE-226 exhibited non-specific effects at higher concentrations. Furthermore, in comparison to WT mice, FAK null mice did not show any difference in TXA2 generation. Therefore, we concluded that differential activation of FAK occurs downstream of Integrins and G12/13 pathways. However, the common effector molecule downstream of integrins and G12/ 13 pathways contributing to TXA2 generation in platelets remains elusive.