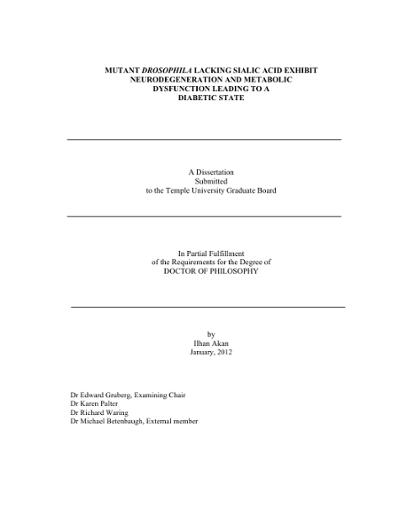 Sialylation, a posttranslational modification of both glycolipids and glycoproteins, is typically found on the terminal positions of glycan chains. Unique among most other sugars, sialic acids are nine carbon sugars that are negatively charged and undergo a variety of side group modifications, which contribute to its role in cell-cell interactions and receptor recognition. While the majority of Drosophila glycoproteins do not terminate in sialic acid compared to mammalian glycoproteins, a sialic acid synthetic pathway is present in Drosophila but it is developmentally regulated and appears to be restricted to the nervous system (Kim et al., 2002; Koles et al., 2004). In order to investigate the role of the sialic acid pathway in Drosophila, we generated a null mutation of the sialic acid synthase gene (SAS) by imprecise excision of a nearby transposable element. Homozygous null flies exhibit partial lethality, male sterility and undergo age dependent neurodegeneration as evidenced by loss of locomotion and increased vacuolization in the brain. Mutant flies also have a shortened life span and display increased sensitivity to heat as they age. To identify protein targets of sialylation that possibly contributed to these phenotypes, a very sensitive solid-phase extraction method was used to capture sialylated glycopeptides from head extracts of wild type and SAS null flies. In collaboration with M. Betenbaugh and H. Zhang at Johns Hopkins University, I identified three sialylated peptides; the major peptide target was derived from the Shaker voltage-dependent potassium channel. The other two peptides were encoded by genes of unknown function. Electrophysiological measurements performed on control and SAS mutant larvae at the pre- and post-synaptic larval neuromuscular junction (in collaboration with T. Dean and A. Seghal, University of Pennsylvania) showed that loss of sialylation induced a depolarizing shift in the gating parameters of the Shaker ion channels, similar to what was previously reported in mammalian cell culture (Johnson and Bennett, 2007). Pre-synaptic neurons from the mutants displayed a two to three fold increase in the number of miniature excitatory peaks suggesting that the neurons were hyperactive. Since Shaker is a major target of sialylation in brain neurons, I suggest that the loss of sialylation of Shaker plays a major role in the neurodegeneration phenotype observed in our SAS null mutant flies. SAS mutant flies are unusually sensitive to starvation, typical of flies that cannot maintain metabolic homeostasis. Upon 24 h of starvation, mutant flies differed from control flies in that they consumed most of their triglyceride stocks, they displayed poor locomotion, had smaller sized cells in their fat body, and reduced their glycogen stores significantly. Mutant flies expressed and likely secreted an excess of insulin like protein, hyperinsulinemia, for the first five days after eclosion. However, as the flies aged (14-21 days) they had high hemolymph sugar, low insulin like protein expression and fewer number of insulin producing cells. All these phenotypes are similar to diabetic patients, as diabetic patients also have metabolic inflexibility, high blood sugar, low insulin secretion, and fewer number of insulin producing cells. It is now known that the Shaker homolog KV1 is expressed in human pancreatic β cells which secrete insulin (Ma et al., 2011). I propose that in our mutants the failure to sialylate the Shaker channel, which is known to be present in insulin producing cells (IPC ), will result in those cells secreting an excess of insulin , which in turn causes the metabolic defects leading to a diabetic state. By studying our sialic acid null mutants we can obtain useful information about how diabetes develop. Using the powerful genetics of flies, we can perform screens to identify novel genes that either enhance or reduce the sensitivity to starvation of our SAS mutants and thus play a role in the development or potential treatment of diabetes