The place and role of (moral) anger in organizational behavior studies 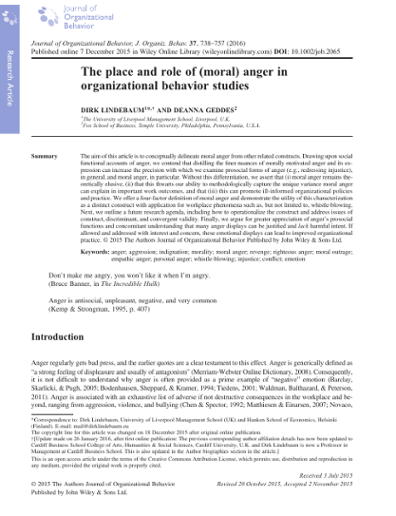 © 2015 The Authors Journal of Organizational Behavior Published by John Wiley & Sons Ltd. The aim of this article is to conceptually delineate moral anger from other related constructs. Drawing upon social functional accounts of anger, we contend that distilling the finer nuances of morally motivated anger and its expression can increase the precision with which we examine prosocial forms of anger (e.g., redressing injustice), in general, and moral anger, in particular. Without this differentiation, we assert that (i) moral anger remains theoretically elusive, (ii) that this thwarts our ability to methodologically capture the unique variance moral anger can explain in important work outcomes, and that (iii) this can promote ill-informed organizational policies and practice. We offer a four-factor definition of moral anger and demonstrate the utility of this characterization as a distinct construct with application for workplace phenomena such as, but not limited to, whistle-blowing. Next, we outline a future research agenda, including how to operationalize the construct and address issues of construct, discriminant, and convergent validity. Finally, we argue for greater appreciation of anger's prosocial functions and concomitant understanding that many anger displays can be justified and lack harmful intent. If allowed and addressed with interest and concern, these emotional displays can lead to improved organizational practice. © 2015 The Authors Journal of Organizational Behavior Published by John Wiley & Sons Ltd.