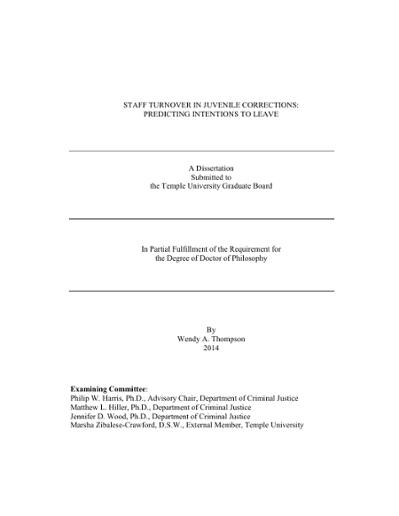 Hiring and maintaining quality staff members is crucial in juvenile correctional facilities. Unfortunately, staff turnover is much more common in correctional agencies than other areas of government work. Although several studies have looked at rates and predictors of employee turnover in adult correctional facilities, few have assessed the issue among juvenile correctional staff. Therefore, this study was guided by two main questions: (1) what are the current turnover rates among frontline staff members at Delaware's public juvenile correctional facilities, and (2) what are the main factors that lead to frontline staff leaving? To answer the above questions, this study used a mixed-methods approach consisting of three stages. In the first stage, total rates of voluntary turnover were provided by an administrator from Delaware State's Division of Youth Rehabilitative Services (DYRS) Personnel Department. The voluntary turnover rates for juvenile correctional officers in Delaware's public facilities for 2011 and 2012 were 7 percent and 13 percent, respectively. This is slightly less than voluntary turnover rates from previous studies on juvenile correctional staff. The next two stages of research were designed to assess the best predictors of intentions to leave for Delaware's frontline staff members. Specifically, the second stage consisted of interviews with 14 staff members from five residential facilities across Delaware. The interviews increased our understanding of how aspects of job satisfaction and organizational commitment apply to this particular sample of employees and provided greater insight into two recently developed aspects of employee turnover theory: Job Embeddedness and the Employment Opportunity Index (EOI). More importantly, three aspects of employee turnover for this sample were discovered: commitment to youth, career stepping stone and job expectations. The discovery of new variables supports the idea that it is important for researchers assessing employee turnover to conduct face-to-face interviews with employees prior to analyzing survey data. The final stage of research compared three models of employee turnover. The first was based on Lambert's 2001 model of correctional officer turnover which stemmed from employee turnover theory. The second model was designed to assess improvement in predicting intentions to leave by incorporating two concepts, Job Embeddedness and the Employment Opportunity Index (EOI), that have not been tested in many studies on employee turnover. The last model that was tested incorporated the three new variables that were created based on the interviews in stage two. Intentions to leave was used as the outcome variable in this study. It measures the extent to which a person desires to leave his or her job. It was chosen for two reasons: 1) Samples consisting of employees who have quit can take years to obtain and 2) Assessing employees intentions to leave could be more useful to administrators. The sample for the last stage of this study consisted of 102 frontline staff members from five of Delaware's six facilities. The data for the last portion of this study were analyzed using structural equation modeling (SEM). This method was appropriate because it could assess the impact of both direct and indirect measures. However, because the sample size for this study was not adequate to run any of the models in full, ordinary least squares (OLS) regression was also incorporated. Results from the quantitative portion of this study showed that there were several variables that predicted intentions to leave for this sample. Similar to most studies that look at intentions to leave, job satisfaction and organizational commitment were two of the strongest predictors of intentions to leave. In terms of individual characteristics, race/ethnicity was the only statistically significant predictor. What was especially interesting about this result was that when previous studies found a race effect, it was that African Americans had higher levels of intentions to leave. This was not the case for this sample. Along these lines, race/ethnicity was significantly associated with one of the factors from Job Embeddedness, organizational fit, which assesses if employees believe they are an appropriate match for their job. Interestingly, whites had lower levels of organizational fit which resulted in higher levels of intentions to leave. Findings from this study have implications for the correctional literature and employee turnover theory. This study supported a long history of employee turnover studies that have found job satisfaction and organizational commitment to be the best predictors of employee turnover. At the same time, this study also found a new predictor of employee turnover specific to juvenile correctional officers: commitment to youth. This stands to have a major impact on future research on employee turnover, not just for juvenile corrections but also studies in the larger body of employee turnover in that this study made it clear that one model does not fit all workers. The concept, commitment to youth, applies only to employees who work with youths. And, the particular way commitment to youth was measured in the present study would only apply to those who work with at-risk youths. Therefore, this study should be viewed as an important step towards understanding the relationship between commitment to youth and decisions made by juvenile correctional officers. This study also had important implications for administrators of juvenile correctional facilities. A major finding stemming from the interviews, which was subsequently confirmed by the quantitative analysis, was that support from coworkers is vital to the overall performance of staff. In fact, subjects reported that a lack of support from coworkers was the difference between a good day and a bad day, and that it was never the juveniles that created a bad day for staff; it was their coworkers. Based on this finding, it is vital that administrators stress the importance of not only working as a team, but also the importance of respecting fellow staff members, especially in front of youths. To do this, administrators should encourage supervisors to demonstrate this type of behavior every day and stress the importance of it during trainings, especially the impact it can have on the residents; several staff members discussed how the youthful offenders can easily detect bad feelings among staff.