American Multitudes: Immunity and Contagion at the Turn of the Century 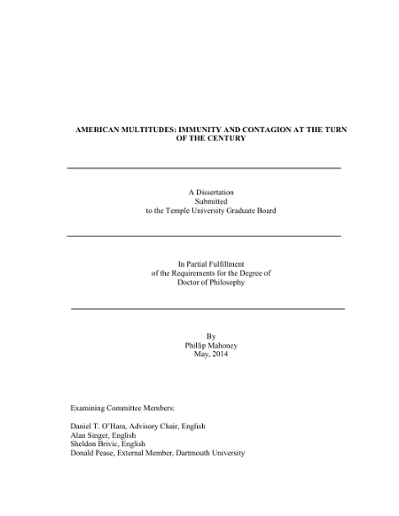 In 1895, French sociologist Gustave Le Bon proclaimed the era of crowds upon us, in his influential work, The Crowd. Le Bon's work was translated into English a year later, inspiring a number of similar works by American sociologists, and almost single-handedly creating the discipline of crowd psychology. Interest in the new masses was not limited to sociologists, however. Due to advances in transportation and communication technologies, and the rise of the city, the problem of "in the mass" came to pervade the atmosphere of America, at the turn of the twentieth-century. Thus, American writers also wrestled with the difficulty of representing this catch-all entity "crowd," often speculating about what the psychology of the crowd might mean for the future of democracy. But, whereas early crowd theory was overwhelmingly conservative in its depiction of the crowd mind as a site of primitive impulses, irrational emotions, and affective contagion, authors like Frank Norris and Sherwood Anderson, though largely ceding to this description, saw in the crowd the possibility for an entirely new social consistency. Contrary to sociological prescriptives designed to brace the individual against the imminent threat of crowd contagion, however, Norris and Anderson identify what contemporary theorist Roberto Esposito terms the "immunitary regime" as the true difficulty to overcome. For Esposito, the biopolitically engendered immunitary dispositif protects modern individuals from "a risky contiguity with the other, relieving them of every obligation toward the other and enclosing them once again in the shell of their own subjectivity" (Terms 49). It is this hard shell of subjectivity that Norris and Anderson attempt to break down in their works. In this way, the two authors represent a small segment of a genealogical thread in American fiction--one stretching from Whitman, to Steinbeck, and beyond--that takes a gambit on what Badiou calls the "communist hypothesis." Perhaps most importantly, though, the texts of Norris and Anderson demonstrate, either deliberately or otherwise, that such a gambit must preclude any recourse to substantialist notions of innate gregariousness, primitive sympathy, or herd instinct. Thus, while refusing to endorse the immunitarian paradigm as the final word on being-together, Norris and Anderson demonstrate how we must work and think through immunity to arrive at an adequate concept of collective life in the modern era. While other studies of the crowd or the masses often ask what the multitude stands for, in a metonymical or metaphorical register, this one asks how it is formed, how it functions, and what it could mean for the possibility of collective life in modernity. Similarly, whereas other studies often judge a particular representation of the crowd against a preformed model of what constitutes the properly political, the following study attempts to unearth the crowd's immanent possibilities to potentially change those very models.