A MULTIMETHOD APPROACH TO ASSESSING SUICIDAL BEHAVIOR AMONG SELF-INJURERS 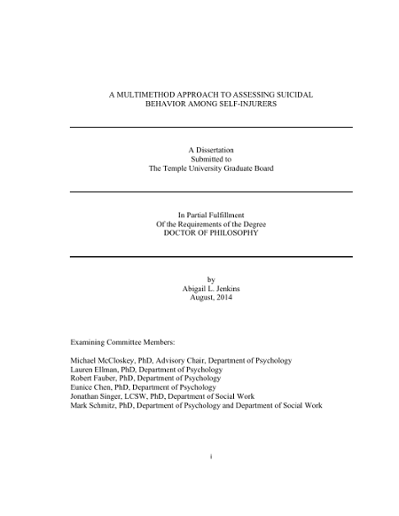 Non-suicidal self-injury (NSSI) and suicidal behavior are prevalent problems, particularly among young adults. However, previous research on factors that might impact the severity of NSSI is limited, with no studies examining concurrently demographic and psychological risk factors, along with how reasons for engaging in, and emotional states surrounding, NSSI might impact its course. Furthermore, no studies to date have examined how these variables may be associated with laboratory-based behavioral indicators of NSSI severity. Similarly, the relationship between NSSI and suicide has been largely unexplored until recently. The few studies that have been conducted to date have relied primarily on self-report batteries of symptoms, largely neglecting interview and performance-based methodologies. The current study used a multi-method approach to elucidate factors associated with: 1) co-morbid suicidal behavior and 2) NSSI severity among a sample of young adults who engage in NSSI. Finally, the current study sought to develop an algorithm for predicting suicidal behavior among self-injurers by simultaneously examining all study variables to determine which variables best differentiated between those with and without a history of suicidal behavior. Hypotheses: It was hypothesized that: 1) greater endorsement of self-punishment, emotion regulation, sensation seeking, and addiction functions of NSSI, along with decreases in negative affect and increases in positive affect during NSSI, would be independently associated with a history of suicidal behavior after controlling for relevant demographic and diagnostic characteristics, and 2) greater endorsement of self-punishment, emotion regulation, sensation seeking, and addiction functions, along with decreases in negative affect and increases in positive affect during NSSI, each would be independently associated with a more severe course of NSSI as indicated by a greater number of self-reported acts and methods of NSSI, stronger implicit associations with NSSI, and higher levels of behavioral self-aggression. Methods: Participants were 68 undergraduates aged 18-26 who had engaged in at least 5 acts of NSSI, with at least one in the past six months. Twenty-eight participants endorsed little or no previous suicidal ideation and were in the NSSI Only group. Forty participants endorsed clinical levels of suicidal behavior (plans or attempts) in their lifetime and were in the NSSI+Suicidal Behavior group. Participants completed a screening procedure during which they completed self-report measures of lifetime history of NSSI and suicidal behavior, as well as self-report measures of impulsivity and affect regulation. Participants who met inclusion criteria were enrolled in the full study during which they completed diagnostic interviews for Axis I and II psychopathology, structured interviews to assess detailed lifetime self-injurious and suicidal behavior, self-report measures to assess current mood, and behavioral tasks assessing implicit associations with NSSI and self-aggression. Results: In terms of predicting group membership, mean level of behavioral self-aggression in the lab and engaging in NSSI for the purpose of emotion regulation significantly predicted membership in the NSSI+S study group. Regarding NSSI severity, engaging in NSSI because one feels addicted, significantly predicted more self-reported lifetime acts and methods of NSSI. Engaging in NSSI in order to meet interpersonal needs was significantly associated with implicit associations with NSSI, and increases in positive affect during NSSI were significantly associated with greater mean behavioral self-aggression in the lab. Finally, a simple algorithm was developed that correctly classified 87% of study participants into their correct study groups. This algorithm included only four variables: a history of suicidal ideation, trait sensation seeking, mean level of behavioral self-aggression in the lab, and current alcohol abuse. Conclusions: The current study revealed that although NSSI and suicidal behavior have several similarities, they are distinct in several ways and many self-injurious individuals are not suicidal. Furthermore, the two study groups did not differ significantly on any Axis I or II diagnosis, suggesting that focusing primarily on diagnostic differentiators between NSSI and suicide may be misguided. Rather, the current study found that reasons for engaging in NSSI, affective states surrounding NSSI, and behavioral self-aggression, contribute significantly to NSSI severity and the relation between NSSI and suicide.