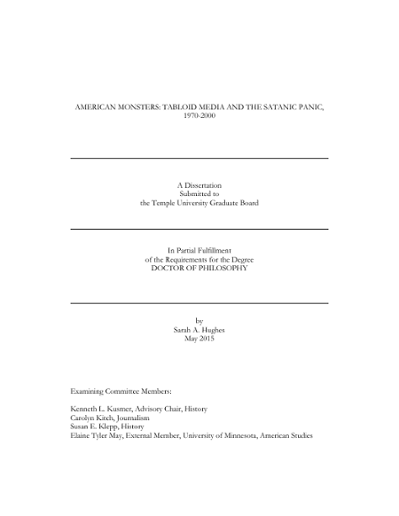 American Monsters: Tabloid Media and the Satanic Panic, 1970-2000," analyzes an episode of national hysteria that dominated the media throughout most of the 1980s. Its origins, however, go back much farther and its consequences for the media would extend into subsequent decades. Rooted in the decade's increasingly influential conservative political ideology, the satanic panic involved hundreds of accusations that devil-worshipping pedophiles were operating America's white middle-class suburban daycare centers. Communities around the country became embroiled in criminal trials against center owners, the most publicized of which was the McMartin Preschool trial in Manhattan Beach, California. The longest and most expensive trial in the nation's history, the McMartin case is an important focal point of this project. In the 1990s, judges overturned the life sentences of defendants in most major cases, and several prominent journalists and lawyers condemned the phenomenon as a witch-hunt. They accurately understood it to be a powerful delusion, or what contemporary cultural theorist Jean Baudrillard termed a "hyperreality," in which audiences confuse the media universe for real life. Presented mainly through tabloid television, or "infotainment," and integral to its development, influence, and success, the panic was a manifestation of the hyperreal. This dissertation explores how the panic both reflected and shaped a cultural climate dominated by the overlapping worldviews of politically active conservatives. In 1980, neoconservatives, libertarians, economic conservatives, and evangelical Christians, who had begun their cultural ascent over the course of the previous decade, were brought together temporarily under the aegis of President Ronald Reagan. With collective strength they implemented their joint agenda, which partly included expanding their influence on the nation's media sources. Coinciding with a backlash against feminism and the gay rights movement, media outlets often represented working women and homosexuals as dangerous to conservative idealized notions of white suburban family life. Such views were incorporated into the panic, which tabloid media reinforced through coverage of alleged sexual abuse of children at day care centers. Infotainment expanded dramatically in the 1980s, selling conservative-defined threats as news. As the satanic panic unfolded through infotainment sub-genres like talk shows and local news programs (first introduced in the late 1940s), its appeal guaranteed the continued presence of the tabloid genre, and reinforced conservative views on gender, race, class, and religion. Although the panic subsided in the early 1990s as journalists and lawyers discredited evidence and judicial decisions turned against accusers, the legacy of the panic continued to influence American culture and politics into the twenty-first century.