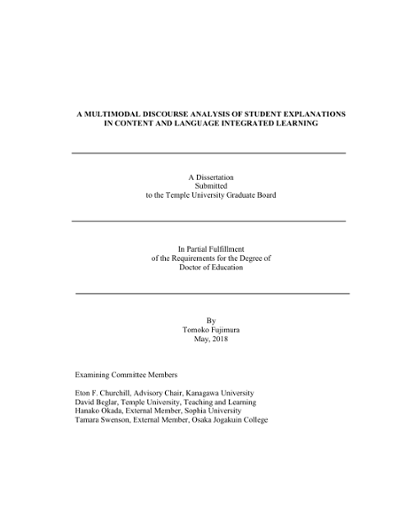 This study was an investigation of students’ explanations of disciplinary knowledge in content and language integrated learning (CLIL). In recent years, an increased interest in teaching content subjects in a foreign language (FL) has brought a growing body of research on CLIL (e.g., Dalton-Puffer, 2007; Llinares, Morton, & Whittaker, 2012), which has yielded valuable insights into CLIL classroom discourse. However, there is a paucity of studies that examined the development of student discourse in CLIL settings because most of existing CLIL research draws on large-scale corpus data and cross-sectional data. Thus, I investigated the processes in which students engaged with disciplinary knowledge and discourse in this case study. The participants included 25 students enrolled in a 15-week content-based English course on sociolinguistics at a Japanese university and a teacher who taught the course. In the sociolinguistics course, the students conducted a group research project in which they carried out sequenced tasks: writing and revising a research proposal, collecting and analyzing data, and presenting findings in oral and written forms. Data were collected in the sociolinguistics course through class observations, video-recordings of the lessons, seven focal students’ group work and oral presentations, and interviews with the focal students and the teacher. Moreover, written reports by the focal students were collected. Informed by a sociocognitive approach to second language acquisition (SLA) (Atkinson, 2002; Atkinson, Churchill, Nishino, & Okada, 2007), a multimodal interaction analysis was conducted on explanations of disciplinary knowledge in the instructional and student discourses. Data analysis suggested that content knowledge was represented at various degrees of abstraction in the textbook and teacher explanations (e.g., specific examples, decontextualized propositional claims). Moreover, the teacher drew on multimodal resources including gestures, body movement, and slides to make dense academic knowledge accessible to the students. Regarding student discourse in group work, the focal students flexibly coordinated diverse semiotic resources including talk, written texts, and gestures, which enabled them to appropriate content knowledge and advance their discussion. In this process, their explanations of disciplinary knowledge tended to change from descriptive ones to complex ones. In the oral presentations, the students made the structure of their explanations explicit and represented disciplinary knowledge at various degrees of abstraction (e.g., specific linguistic behaviors, sociolinguistic interpretations). In the question and answer sessions that followed the oral presentations, the teacher interactionally provided feedback, which likely led some students to produce more discipline-appropriate explanations (e.g., elaborated content, increased precision). Although there was a variation among the students, the written reports exhibited the increased use of metadiscourse markers including hedges, which likely resulted in careful explanations of propositional knowledge. These findings suggest that diverse discursive contexts afforded by sequenced tasks and access to varied semiotic resources can facilitate the appropriation of content knowledge by students and support the formulation of context-specific and discipline-appropriate explanations.