The Structured Self: Authenticity, Agency, and Anonymity in Social Networking Sites 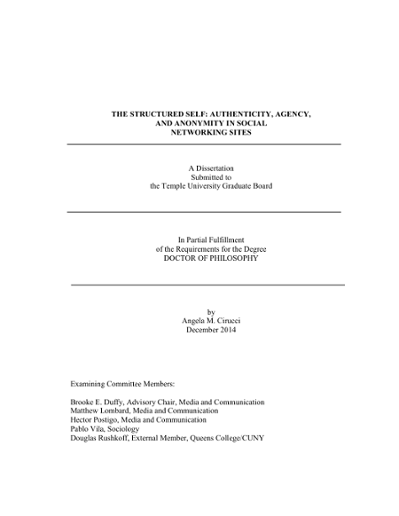 The purpose of this dissertation is to explore social networking sites' structural affordances and their implications for identity creation, maintenance, performance, broadcast, and comprehension. Facebook is employed as a case study. By applying affordance theory, I argue that scholars should recognize Facebook as an ethic, or as a mediator, that employs moral choices when filtering input that is then displayed and aggregated through the site. By framing identity as narrative, I show that identities are on-going and are not only created via social expectations, but also work as reflexive tools used to write the self into being. Specifically, due to the large scope of this project, I explore the ways in which the structure and cultivated cultures of the site influence notions of, and expectations for, authenticity, agency, and anonymity. Breaking down Facebook into its constituent parts, I first completed a structural discourse analysis of the Sign Up Page, the About Page, Likes, Friends, Photographs, the Timeline, and Cookies. Next, I conducted focus group and one-on-one interviews with 45 emerging adults to learn how they recognize and work within Facebook's structure. Themes emerged that speak to the "cultures" that Facebook privileges and reifies through their granted affordances: Digitally Structured Culture, Visual Culture, Celebrity Culture, and Socially Divided Culture. I found that users generally adhere to Facebook's problematic conceptions of identification on the site, particularly through the ways in which they describe and perform authenticity, agency, and anonymity. Users have come to view the site as the official social space and thus feel pressured to perform a unitary, "accurate," and superficial self. The inherent trust placed in Facebook has led users to rely on the site's decisions regarding structural affordances and to not question the identity guidelines provided. This dissertation concludes with a call for a more rigorous understanding of social networking affordances and a wide-spread application of methods that recognize social media as non-neutral filters. I argue that the limited choices presented by Facebook compel users to build conceptions of identity that adhere to the cultural expectations privileged by the site. Although it is clear that my methods can be applied more generally to other social media and digital spaces, I also argue that Facebook is unique in that it is a "tentpole" of both interfaces and user content--the site offers a variety of identity performance tools and acts as the main place that users visit to "conduct research" on others.