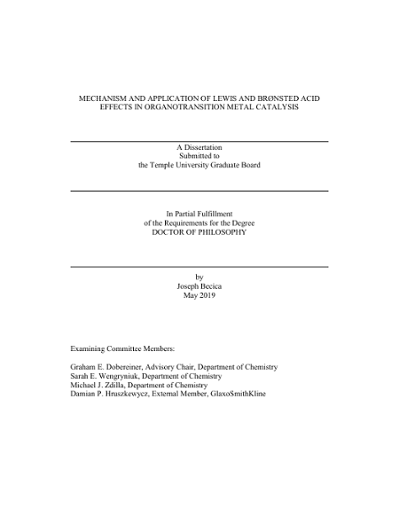 The essential questions of the dissertation research described here address concepts in homogeneous catalysis and organometallic chemistry, with a focus on method development for catalytic reaction applications in organic synthesis. The unifying theme throughout the research is the development of rational design principles for cooperative catalysis through both mechanistic and empirical study. Cooperative catalysis – in which multiple catalysts enable increased activity or selectivity versus a single catalyst system – can involve some combination of a transition metal, Lewis acid, and Brønsted acid. Chapter 1 reviews the literature regarding the cooperativity of transition metal and Lewis acid catalysis, and discusses four main areas in organic synthesis and the facilitation of these trnasformations by Lewis acids: (a) C-C bond and C-H activation, (b) hydrogenolysis of carboxylic acid derivates and ethers, (c) Au catalyzed alkyne activation and cyclization reactions, and related reactions, and (d) Pd catalyzed C-C and C-N bond forming reactions. These different topics are selected based on the mechanistic insight provided into the nature of transition metal-Lewis acid cooperativity. Chapter 2 describes the observation of Lewis acid acceleration of a Pd catalyzed C-N bond coupling. The synthetic methodology is elaborated using metal triflates as cocatalysts, and Lewis acid acceleration is observed for a variety of different N-nucleophiles. Qualitative mechanistic study implicates the role of halide anions in inhibiting this catalytic reaction, and it is proposed that metal triflates are competent to accelerate catalysis by binding halide anions, and therefore attenuating halide inhibition. This hypothesis is supported by initial rate measurements and 31P NMR experiments. Rationalizing trends observed in the reactivity of Lewis acids in the cooperative reactions described in Chapters 1 and 2 is challenging. Therefore, our goal was to provide further insight into the behavior or Lewis acids in complex reaction settings. Inspired by 31P NMR experiments from Chapter 2, a next generation NMR probe to observe anion exchange reactions of metal triflate Lewis acids is developed. Metal-ligand titrations are performed for a variety of metal triflates with complexes of the type (POCOP)Pd(X) (X = Cl, Br, I, OAc) to observe a variety of different X anion affinities for metal triflates. The determined parameters are discussed within the context of Lewis acid catalyzed reactions, along with other Lewis acidity parameters, such as hydrolysis constants and effective charge density. The data suggest that the chloride and iodide anion affinities of a Lewis acid represent a continuum of π-acidity (high anion affinity) and propensity to dissociate into cationic Mz+ species (low anion affinity). The anion affinities do not correlate with the tendency of a metal salt to release Brønsted acids or their respective effective charge densities. Based on the insight into Lewis acidity from Chapters 1 and 3, the parallel between Brønsted and Lewis acids is realized, and the role of both Brønsted and Lewis acids in mediating organic reactions is often related. In Chapter 4, further questions into the cooperativity of π-acids and Brønsted acids is explored. It is demonstrated that selectivity of alkene isomerization can be controlled through a cooperative system. A series of Mo(0) complexes are prepared and explored in their ability to mediate the conversion of terminal alkenes to internal alkenes, and the reaction is found to be promoted by Brønsted acid (TsOH) cocatalyst. Rational design principles are developed to maximize selectivity for (Z)-2-alkenes in this catalyst system. It is proposed that TsOH acts to generate a catalytic MoH species which mediates catalysis, and the role of phosphine ligands is critical in inhibiting the formation of less selective isomerization catalysts. Chapter 5 and 6 entail further method development for catalytic reactions based on the mechanistic wisdom described in previous chapters. High throughput experimentation is employed to rapidly assess conceptual aspects of Pd catalysis, such as ligand and additive effects, and facilitate catalyst discovery and optimization. Based on the substrate scope performed in Chapter 2, it was realized there is a knowledge gap in the ability to synthesize tertiary sulfonamides, both in terms of conventional methods, or modern Pd-catalyzed methods. A significant advance in organic reaction methodology is described: a new Pd catalyst featuring the AdBippyPhos ligand is discovered to be apt for the coupling of secondary sulfonamides with heteroaryl halides to yield tertiary N-heteroarylhalides. Using high throughput experimentation, 24 diverse heterocycles are screened with 12 sulfonamide variants to prepare &gt;100 new products on microscale. Computational modelling reveals the unique steric parameters of the AdBippyPhos ligand, and a mechanistic rationale for its success in catalysis is provided. Lastly, Chapter 6 describes the use of a LiOTf additive to control the selectivity of Pd-catalyzed C-C bond forming reactions. In the presence of LiOTf, a Mizoroki-Heck type reaction, the alkenylation of an aryl halide with a vinyl ether, proceeds with regioselectivity. In the absence of LiOTf, a solvent (CH3CN) activation pathway proceeds to give benzyl nitrile products. High throughput microscale reactions discovered that the Pd/xantphos catalyst is uniquely selective to provide branched styrenes when using the Cs2CO3/CH3CN base/solvent combination. However, reaction performance differed on large scale reactions, where LiOTf was necessary to observe the Mizoroki-Heck reaction pathway. Mechanistic study, in the form of kinetic experiments and 31P NMR experiments, focused on the role of LiOTf in affecting chemoselectivity. It is proposed that xantphos oxidation is responsible for mediating the Mizoroki-Heck reaction pathway, whereas in the absence of xantphos oxidation, CH3CN α-arylation ensues. Due to the insoluble nature of the catalyst materials, xantphos oxidation is ordinarily slow under anaerobic conditions due to mass transfer limitation. LiOTf generates a soluble [(xantphos)Pd(NCCH3)2][OTf]2 and potentially mediates the formation of xantphos-monoxide catalyst which is competent for alkenylation.