Setting up Camp: Identifying Camp through Theme and Structure 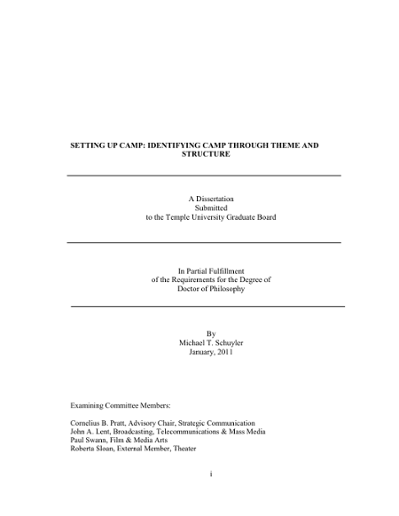 Camp scholarship remains vague. While academics don't shy away from writing about this form, most exemplify it more than define it. Some even refuse to define it altogether, arguing that any such attempt causes more problems than it solves. So, I ask the question, can we define camp via its structure, theme and character types? After all, we can do so for most other genres, such as the slasher film, the situation comedy or even the country song; therefore, if camp relies upon identifiable character types and proliferates the same theme repeatedly, then, it exists as a narrative system. In exploring this, I find that, as a narrative system, though, camp doesn't add to the dominant discursive system. Rather, it exists in opposition to it, for camp disseminates the theme that those outside of heteronormativity and acceptability triumph not in spite of but because of what makes them different, othered or marginalized. Camp takes many forms. So, to demonstrate its reliance upon a certain structure, stock character types and a specific theme, I look at the overlaps between seemingly disparate examples of this phenomenon. These include a documentary film (Grey Gardens), a one-woman show (Elaine Stritch: At Liberty), a pop concert (Cher: The Farewell Tour), a diva (Vanessa Williams), a horror film (Carrie), a biopic (Ed Wood), an episodic television procedural (Charlie Angels), and a serialized television dramedy (Desperate Housewives). Then, I take what I find in those chapters and apply it to a non-canonical camp text when I look at theatrical and novelistic depictions of a sport: baseball. This reading suggests that baseball can actually serve as a form of camp. Throughout, by employing structural analysis, queer theory and postmodernism, I uncover camp mythological potential. In addition to demonstrating something which no critic has done previously, namely, that we can, indeed, identify camp via structure, character and particularly theme, this investigation results in several other discoveries. For instance, it reveals that most academics incorrectly label or dismiss camp as a gay only discipline. As becomes evident here, its theme has built into it widespread appeal, as opposed to appeal solely the domain of gay males. Also, it demonstrates camp continued relevance and vitality. Some scholarship in the last two decades or so has proclaimed camp dead, dying or insignificant. By showing our continued need for this form, by using up to the minute examples and by illustrating that critics often wholly misunderstand and misidentify this phenomenon, this dissertation challenges those assertions head on. History demonstrates a longstanding tradition of and a continued need for people to camp. Yet, the scholarship surrounding this form limits, dismisses or misidentifies it, its audience, its relevance, its appeal, its history, its power, and so forth. By asking if we can identify a timeless and necessary theme, one illustrated via character and structure, and in finding that we can, I hope to lay these problems and misconceptions to rest once and for all. In the end, camp exists. And, it exists as a &lt;italics&gt;narrative system as a genre, if you will. Sometimes, genres exist cyclically, lying dormant for a period, only to reemerge, refreshed and once again popular, at a later time. (We've seen this in cinematic westerns or Broadway musicals, for example.) So, genres seemingly never die. This addition to scholarship on camp, then, demonstrates that the myth producing system investigated here has an identity, a purpose, a history, a relevance, a widespread audience, a great deal of both power and potential, and a likelihood that it will always exist. And, since, as I find, camp again and again offers the theme that others regularly find success due to their alterity (as opposed to in spite of it), these findings make sense, for the form serves its own function.