EXAMINING MENTAL ILLNESS STIGMA AND THE IMPACT ON HELP SEEKING ACROSS RACE AND ETHNICITY: A FOCUS ON SOUTH ASIAN COMMUNITIES 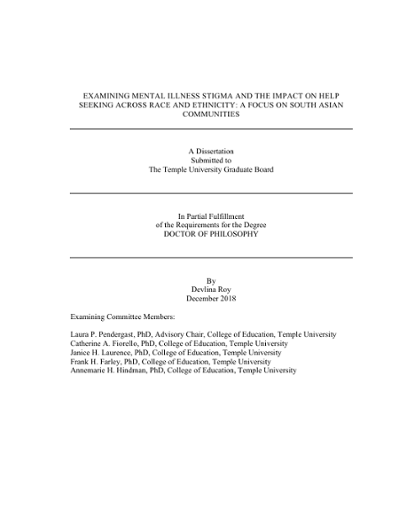 From medieval to modern times, mental illness is a construct that has been deeply misunderstood and stigmatized by humankind (Dubin & Fink, 1992). Individuals living in the United States experience a fear of being judged or ridiculed for their psychopathological symptomology as a result of mental illness stigma (Bharadwaj et al. 2015). Mental illness stigma impacts how individuals choose to seek help and whether they choose to seek help at all (Rusch et al., 2005). Individuals from diverse cultural and ethnic backgrounds face unique barriers to access to mental healthcare (Cauce et. al, 2002). Specifically, individuals from diverse backgrounds are affected by the social and cultural environment they are a part of where cultural factors can impact whether or not these individuals choose to seek help from mental health service providers (Cauce et. al, 2002). The theory of “Double Stigma” (Gary, 2005) proposed that individuals from diverse ethnic and cultural backgrounds face impactful barriers to mental healthcare as a result of of mental illness stigma combined with racial discrimination. Different ethnic minority groups face unique barriers to mental healthcare. African Americans are a group of individuals who have been found to associate seeking mental health treatment with feelings of embarrassment when compared to European Americans (Snowden, 2001). Additionally, Asian Americans are a group of individuals who have often referred to as the “model minority,” a problematic notion which suggests that in terms of mental illness, this ethnic group has had little to no social or psychological problems and have assimilated well to life in the United States (Sue & Morishima, 1982). This theory has contributed to Asian American communities internalizing the idea that they must uphold the standard that has been set for them, ultimately impacting their decision to seek help for mental illnesses (Sue & Morishima, 1982). Within the Asian American community, South Asians are the third largest and fastest growing ethnic group in the United States (U.S. Census Bureau, 2000). Within the South Asian community, stigma is highly prevalent and perpetuated by discrimination (Neelam, Mak, & Wessely, 1997). This discrimination and judgement from one’s own community impacts if and how individuals from South Asian communities choose to seek help. Loya, Reddy and Hinshaw (2010) found that relative to European American college students, South Asian college students presented with higher level of reluctance to seek help through University-based counseling services. Loya and colleagues (2010) also found over all poorer attitudes toward individuals with mental illness from South Asian college students. This study investigated perceptions of mental illness and help seeking across racial groups, with a specific focus on South Asian communities. Specifically, a model examining informal and formal help seeking was utilized to explore differences in perceptions of help seeking practices across racial groups. Through multigroup structural equation modeling (SEM), changes in model fit were explored to assess whether negative perceptions of mental illness predicted informal and formal help seeking behaviors across racial groups. Participants included 355 individuals, 18 and older, across the United States who identified as South Asian, White/European American or Black/African American. Based on previous research which has found that ethnic minority groups face unique barriers to accessing appropriate mental healthcare (Cauce et. al, 2002; Gary, 2005; Snowden, 2001; Sue & Morishima, 1982; Neelam, Mak & Wessely, 1997; Loya, Reddy & Hinshaw, 2010), it was hypothesized that South Asian individuals would have more negative perceptions of individuals with mental illness as well as more negative attitudes towards all modes of help seeking compared to their non-South Asian counterparts. Additionally, it was hypothesized that South Asian females will have more positive attitudes towards mental illness than South Asian males. Results indicated that a more positive perception of mental illness is associated with more likelihood of seeking help for mental illness for all racial groups examined through SEM. Results also indicated similar fit indices and invariance across all racial groups examined through SEM. Through univariate analyses, South Asian females were found to have a more positive view of individuals with mental illness than South Asian males. Univariate analyses also revealed that compared to White/European Americans, individuals who identified as Black/African American perceived mental illness more negatively when assessing individuals their own racial group. Implications, strengths, limitations, and directions for future research are discussed.