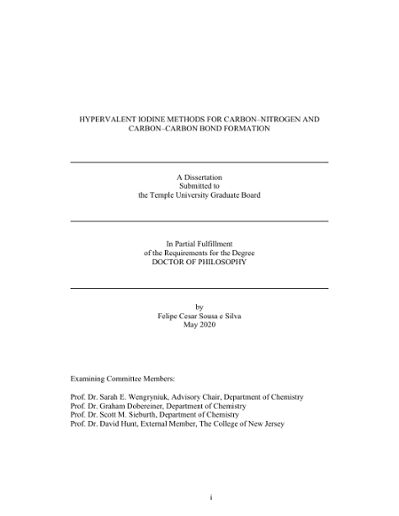 Carbon-carbon and carbon-nitrogen bond forming events are essential in chemistry. Although numerous stoichiometric/catalytic methods provided elegant and powerful solutions enabling those processes, the use of scarce/toxic reagents and harsh conditions is still ubiquitous in this field. As a result, extensive research has been conducted in the development of environmentally benign and inexpensive reagents for such transformations, however, general solutions remain a challenge. In this context, one of the focuses of our lab is to enable those processes in a more practical and sustainable fashion by using hypervalent iodine reagents. In this dissertation we demonstrate the synthetic applications of λ3-iodane reagents towards the formation of challenging carbon-carbon and carbon-nitrogen bonds in a complementary way to the methods already reported. Chapter 1 of this dissertation outlines the general electronic structure, geometry, synthesis and reactivity of λ3-iodanes as serves and background regarding these reagents. Chapter 2 highlights the applications of λ3-iodanes to access high-oxidation state transition metals until the year of 2017. This literature review provides detailed information about how λ3-iodanes can be applied to access 1st, 2nd and 3rd row high-oxidation complexes, as well as mechanistic details and synthetic utility of high-valent transition metals. Chapter 3 demonstrates our efforts to generate selective carbon-nitrogen and carbon-carbon products from a high-valent nickel complex. This led to important information of this mechanism adopted by the reaction and how the choice of oxidant can impact 1e- versus 2e- oxidative pathways on “hard” nickel pincer scaffolds. Chapter 4 describes our efforts towards the selective formation of α-C(sp2)-C(sp2) bonds at the α-position of enones via a reductive Iodonium-Claisen rearrangement. We demonstrate the utility of β-pyridinium silyl enol ethers as a platform for direct α-arylation, and how the 2-iodo-aryl-α-arylated enones can be used to access diverse heterocyclic structures. Chapter 5 demonstrates our initial efforts towards the selective C2 or C3 carbon-nitrogen bond formation on indoles. By exposing different indoles to (bis)cationic nitrogen-ligated HVI (N-HVI) reagents we found that selective C2 or C3 C-H indole-pyridinium salts can be formed in good to excellent yield. Although, this project is not finished yet, we anticipate the indole-pyridinium salts generated could serve as platform for accessing diverse piperidines, pyridones and primary amines through straightforward procedures. The combined chapters of this dissertation highlight the applications of λ3-iodanes towards transition metals and emphasize the applications of these reagents to enable challenging C–C and C–N bond formation events. More importantly, this dissertation serves as a guide for future development of the hypervalent iodine field.