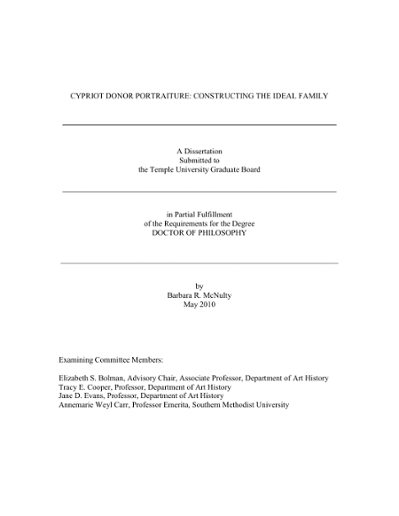 This study focuses primarily on donor portraits of families found in Cypriot wall paintings and icons created during the Lusignan and Venetian periods. Although donor portraiture is a mode of expression that dates to antiquity, in the medieval period an increasingly prosperous upper middle class used this genre more frequently. My concern is with the addition of children to these portraits and the ways in which this affects the family portrayal on Cyprus. These portraits are intriguing because they provide a rare glimpse into the culture and people of this island as constructed within the medium of portraiture. They provide visual evidence of the donors' ideals of family in these lasting monuments to their memory. There are noticeable changes in these portraits through time that indicate the shifting foreign rulership faced by the population. Part of the Byzantine Empire until captured by Richard the Lionheart in 1191, Cyprus came under Frankish domain when it was transferred in 1192 to Guy de Lusignan, the dispossessed King of Jerusalem. For years Cyprus had been a stopping place for pilgrims and, later, crusaders on their way to the Holy Land. By the time Cyprus came under Venetian rule, it had grown as a stopping place for merchants as part of their trade route to the East. This exposure to cross cultural trade, migrations, and differing reigning powers makes Cyprus a complex study in social history. These layers of mixed social identities across ethnic, religious and political boundaries are documented in the island's donor portraits. Part of this analysis is an attempt to discern in these constructed identities what is indigenous, what is foreign and what is part of the changing times. A close examination of these images uncovers this mingling of identities and certain conventions in the way these donor portraits become expressions of the family. The strategy used to examine these donor portraits is to look at them by employing some of the characteristic functions of portraiture, in this case as outlined by Shearer West in her introduction to portraiture. After an introductory chapter that details some background on donor portraiture and the art of Cyprus, each of the following chapters uses two main images for comparison to explore the ways in which they might reveal aspects of the family. This comparative method is used in the successive chapters with the one constant image of the Zacharia family, painted during the Venetian occupation, as a basis for comparison. Chapter two takes this portrait and compares it to the portrait of Neophytos, a twelfth-century hermit monk who also used the Deësis scene as the setting for his portrait. By looking at these particular scenes as works of art, this chapter introduces ideas to consider throughout the dissertation on the ways these constructions reveal wishes of the donors, such as strategies of hierarchy, of veneration and viewer's access. Chapter three explores how the family group portrait serves as a document for the biography of the family. Chapter four deals with the important social practice of the dowry and my idea that some of the later portraits, which include daughters, may be displaying dowry wealth. Chapter five looks at family commemorative portraiture found particularly in icons, beginning the fourteenth century, where deceased family members are portrayed alongside, seemingly, living family members. Finally, in chapter six, I examine the ways in which these family portraits may indicate political changes on the island, especially as Cyprus moves from a feudal society to a commercial one in the Venetian period. In order to facilitate discoveries that might be made by organizing the material in a systematic manner, I have assembled a catalogue of Cypriot family donor portraits and a chart indicating the numbers of men, women and children included in family groups, in the appendices. It is my hope that this dissertation will create more discussion about family groups and will, hopefully, uncover other portraits that may be added to this list, making it a more complete picture of the surviving record.