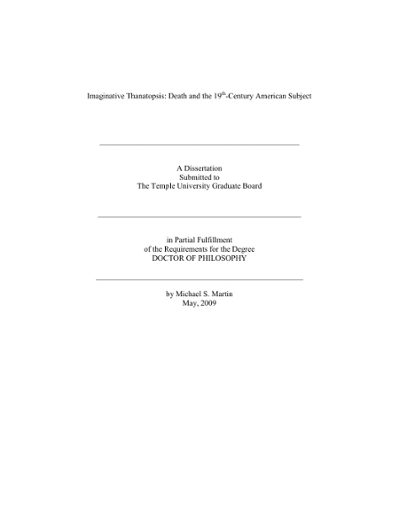 In my dissertation, I intend to focus on the way that supernaturalism was produced and disseminated as a cultural category in 19th-century American fiction and non-fiction. In particular, my argument will be that 19th-century authors incorporated supernaturalism in their work to a large degree because of changing death practices at the time, ranging from the use of embalming to shifts in accepted mourning rituals to the ability to record the voices of the dead, and that these supernatural narratives are coded ways for these authors to rethink and grapple with the complexities of these shifting practices. Using Poe's "A Tale of Ragged Mountains" (1844) and Narrative of Arthur Gordon Pym (1838), Alcott's Little Women (1868), Hawthorne's House of the Seven Gables (1851), Melville's Moby-Dick (1851), Brockden Brown's Weiland (1798), Phelps' short fiction, Shaker religious writings, and other texts, I will argue that 19th-century narration, instead of being merely aligned with an emerging public sphere and the development of oratory, relied heavily on thanatoptic or deceased narrators, the successive movement of the 18th-century British graveyard poets. For writers who focused on mesmerism and mesmerized subjects, the supernatural became a vehicle for creating a type of "negative freedom," or coded, limitless space from which writers such as Margaret Fuller and Harriet Martineau could imagine their own death and do so without being scandalous. The 19th-century Shaker "visitations," whereby spirits of the dead were purported to speak through certain Shaker religionists, present a unique supernatural phenomenon, since this discrete culture also engaged with coded ways for rethinking death practices and rituals through their supernatural narratives. Meanwhile, such shifting cultural practices associated with death and its rituals also lead, I will argue, to the development of a new literary trope: the disembodied child narrator, as used first in Brockden Brown's novel and then in Melville's fiction, for example. Finally, I will finish my dissertation with a chapter that, while also considering how thanatoptic narrative is used in literary supernaturalism, will focus more on spaces, mazes, and, to use Benjamin's term in The Arcades Project (tran. 1999), arcades that marked 19th-century culture and architecture and how this change in space - and subsequent thanatoptic geography in 19th-century fiction - was at least partially correlated to shifting death practices. I see this project as contributing to 19th-century American scholarship on death practices and literature, including those by Ann Douglas, Karen Sanchez-Eppler and Russ Castronovo, but doing so by arguing that the literary mechanism of supernaturalism and the gothic acted as categories or vehicles for rethinking and reconsidering actual death practices, funeral rituals, and related haunted technology (recordings, daguerreotypes) at the time.