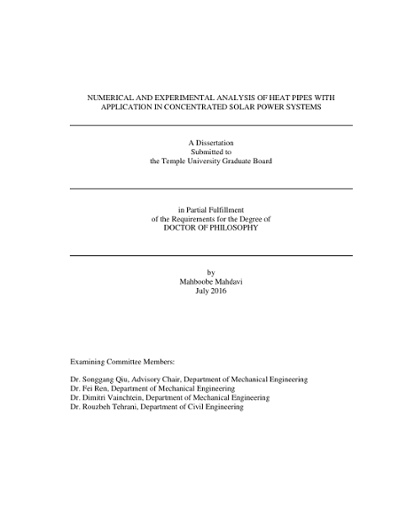 Thermal energy storage systems as an integral part of concentrated solar power plants improve the performance of the system by mitigating the mismatch between the energy supply and the energy demand. Using a phase change material (PCM) to store energy increases the energy density, hence, reduces the size and cost of the system. However, the performance is limited by the low thermal conductivity of the PCM, which decreases the heat transfer rate between the heat source and PCM, which therefore prolongs the melting, or solidification process, and results in overheating the interface wall. To address this issue, heat pipes are embedded in the PCM to enhance the heat transfer from the receiver to the PCM, and from the PCM to the heat sink during charging and discharging processes, respectively. In the current study, the thermal-fluid phenomenon inside a heat pipe was investigated. The heat pipe network is specifically configured to be implemented in a thermal energy storage unit for a concentrated solar power system. The configuration allows for simultaneous power generation and energy storage for later use. The network is composed of a main heat pipe and an array of secondary heat pipes. The primary heat pipe has a disk-shaped evaporator and a disk-shaped condenser, which are connected via an adiabatic section. The secondary heat pipes are attached to the condenser of the primary heat pipe and they are surrounded by PCM. The other side of the condenser is connected to a heat engine and serves as its heat acceptor. The applied thermal energy to the disk-shaped evaporator changes the phase of working fluid in the wick structure from liquid to vapor. The vapor pressure drives it through the adiabatic section to the condenser where the vapor condenses and releases its heat to a heat engine. It should be noted that the condensed working fluid is returned to the evaporator by the capillary forces of the wick. The extra heat is then delivered to the phase change material through the secondary heat pipes. During the discharging process, secondary heat pipes serve as evaporators and transfer the stored energy to the heat engine. Due to the different geometry of the heat pipe network, a new numerical procedure was developed. The model is axisymmetric and accounts for the compressible vapor flow in the vapor chamber as well as heat conduction in the wall and wick regions. Because of the large expansion ratio from the adiabatic section to the primary condenser, the vapor flow leaving the adiabatic pipe section of the primary heat pipe to the disk-shaped condenser behaves similarly to a confined jet impingement. Therefore, the condensation is not uniform over the main condenser. The feature that makes the numerical procedure distinguished from other available techniques is its ability to simulate non-uniform condensation of the working fluid in the condenser section. The vapor jet impingement on the condenser surface along with condensation is modeled by attaching a porous layer adjacent to the condenser wall. This porous layer acts as a wall, lets the vapor flow to impinge on it, and spread out radially while it allows mass transfer through it. The heat rejection via the vapor condensation is estimated from the mass flux by energy balance at the vapor-liquid interface. This method of simulating heat pipe is proposed and developed in the current work for the first time. Laboratory cylindrical and complex heat pipes and an experimental test rig were designed and fabricated. The measured data from cylindrical heat pipe were used to evaluate the accuracy of the numerical results. The effects of the operating conditions of the heat pipe, heat input, and portion of heat transferred to the phase change material, main condenser geometry, primary heat pipe adiabatic radius and its location as well as secondary heat pipe configurations have been investigated on heat pipe performance. The results showed that in the case with a tubular adiabatic section in the center, the complex interaction of convective and viscous forces in the main condenser chamber, caused several recirculation zones to form in this region, which made the performance of the heat pipe convoluted. The recirculation zone shapes and locations affected by the geometrical features and the heat input, play an important role in the condenser temperature distributions. The temperature distributions of the primary condenser and secondary heat pipe highly depend on the secondary heat pipe configurations and main condenser spacing, especially for the cases with higher heat inputs and higher percentages of heat transfer to the PCM via secondary heat pipes. It was found that changing the entrance shape of the primary condenser and the secondary heat pipes as well as the location and quantity of the secondary heat pipes does not diminish the recirculation zone effects. It was also concluded that changing the location of the adiabatic section reduces the jetting effect of the vapor flow and curtails the recirculation zones, leading to higher average temperature in the main condenser and secondary heat pipes. The experimental results of the conventional heat pipe are presented, however the data for the heat pipe network is not included in this dissertation. The results obtained from the experimental analyses revealed that for the transient operation, as the heat input to the system increases and the conditions at the condenser remains constant, the heat pipe operating temperature increases until it reaches another steady state condition. In addition, the effects of the working fluid and the inclination angle were studied on the performance of a heat pipe. The results showed that in gravity-assisted orientations, the inclination angle has negligible effect on the performance of the heat pipe. However, for gravity-opposed orientations, as the inclination angle increases, the temperature difference between the evaporator and condensation increases which results in higher thermal resistance. It was also found that if the heat pipe is under-filled with the working fluid, the capillary limit of the heat pipe decreases dramatically. However, overfilling of the heat pipe with working fluid degrades the heat pipe performance due to interfering with the evaporation-condensation mechanism.