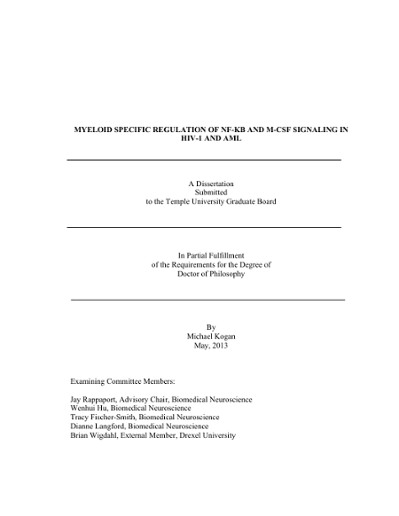 The HIV protein, Vpr, is a multifunctional accessory protein critical for efficient viral infection of target CD4+ T cells and macrophages. Vpr is incorporated into virus particles and functions to transport the preintegration complex into the nucleus where the process of viral integration into the host genome is completed. This action is particularly important in macrophages, which as a result of their terminal differentiation and non-proliferative status, would be otherwise more refractory to HIV infection. Vpr has several other critical functions including activation of HIV-1 LTR transcription, cell-cycle arrest due to DCAF-1 binding, and both direct and indirect contributions to T-cell dysfunction. The interactions of Vpr with molecular pathways in the context of macrophages, on the other hand, support accumulation of a persistent reservoir of HIV infection in cells of the myeloid lineage. The role of Vpr in the virus life cycle, as well as its effects on immune cells, appears to play an important role in the immune pathogenesis of AIDS and the development of HIV induced end-organ disease. In view of the pivotal functions of Vpr in virus infection, replication, and persistence of infection, this protein represents an attractive target for therapeutic intervention. Numerous studies have reported that Vpr alters NF-kappa B signaling in various cells, however, the findings have so far been largely conflicting with reports both stimulatory and inhibitory effects of Vpr. Our aim was to investigate the role of Vpr signaling in myeloid cells and address discrepancies that have been reported in the field. Our results show that Vpr expressed intracellularly is inhibitory to NF-kappa B, while extracelluar Vpr may have some stimulatory effects. Consistent with this notion, we report that Vpr has inhibitory effects that are specific to the TNF-alpha pathway, but not the LPS pathway, suggesting that multiple targets of Vpr may exist for NF-kappa B regulation. Further, we identify VprBP as one possible cellular component of Vpr's regulation of I-kappa B-alpha in response to TNF-alpha stimulation. We did not identify such a role for HSP27, which instead seems to inhibit Vpr functions. Finally, our findings suggest that NF-kappa B regulation by Vpr is further changed by the presence of other HIV-1 components within the cells, as U1 cells lacking Vpr were unexpectedly less responsive to TNF-alpha than those cells that had normal Vpr expression levels. This data suggests that Vpr may serve an important role in vivo by selectively inhibiting immune activation while stimulating NF-kappa B mediated viral production in HIV-1 infected T-cells and myeloid cells. M-CSF is a cytokine that promotes monocyte differentiation and survival. When over-expressed, M-CSF contributes to pathology in a wide variety of diseases including osteoporosis, obesity, certain human cancers, and in HIV-1 infection, particularly with respect to monocyte/macrophage infection and the development of HIV-1. In this study, our aim is to expand on the current knowledge of M-CSF regulation by NF-kappa B, a prominent transcription factor during inflammation and HIV-1 infection. Our results suggest that TNF-alpha promotes M-CSF secretion in macrophages and activates the -1310/+48 bp M-CSF promoter in Mono-Mac 1 cells. Inhibitors of the NF-kappa B pathway, diminish this response. We identified four putative NF-kappa B and four C/EBP-beta binding sites within the M-CSF promoter. Our findings using M-CSF promoter constructs mutated at individual NF-kappa B locations suggest these sites are redundant with respect to M-CSF promoter regulation. TNF-alpha treatment promoted NF-kappa B p65 binding to the M-CSF promoter in PMA treated U937 cells chronically infected with HIV-1 (U1 cells), but not in PMA treated uninfected U937 cells, suggesting that the presence of HIV-1 increases the NF-kappa B response. In conclusion, our findings demonstrate that NF-kappa B induces M-CSF expression on a promoter level via multiple functional NF-kappa B binding sites and that this pathway is likely relevant in HIV-1 infection of macrophages. The oncogenic potential of M-CSF receptor has been has been suggested over thirty years ago, however, few current studies have focused on the role of the receptor in AML. In a clinical trial for AML, Sunitinib was found to hold some efficacy for treating the disease. The authors hypothesized that the primary therapeutic target of Sunitinib in AML is FLT3 kinase. However, FLT3 inhibition alone has not been shown to recapitulate all the effects of Sunitinib in vitro and, furthermore, the drug is also known to have cross reactivity to other potential oncogenic receptors. In this study, we treated three myeloid cell lines, Mono-Mac 1, THP-1 and U937 with Sunitinib and a proprietary cFMS inhibitor from Johnson and Johnson to test the anti-cancer effect in of such treatment. We observed that only Mono-Mac 1 cells had diminished proliferation in vitro. Mono-Mac 1 cells had inhibited ERK as a result of cFMS inhibition and showed a dose dependent increase in cFMS expression with both Sunitinib and J&J cFMS-1 treatment. Our results suggest potential for cFMS as an important target of Sunitinib or other similar drugs AML, either independently or in combination with other targets. Alternatively, cFMS may be a marker for differentiation of AML and may be linked with responsiveness to certain therapeutics. In both cases, the future study of cFMS may produce more targeted therapeutic approaches and may be a suitable tool for the development of personalized medicine for AML.