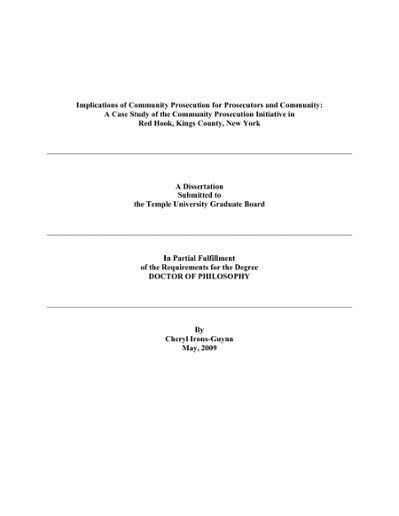 Prosecutors are powerful actors in the criminal justice system. Scholars make the argument that prosecutors exercise far more control over criminal matters than any other agency (Thomas and Fitch, 1976, p. 509; McDonald, 1979, p. 18-19, Wickersham, 1931) . Over time, various changes have augmented prosecutorial power, ranging from the decision to make the office of the prosecutor an elected one, thereby affording prosecutors independence in carrying out their duties (Misner, 1996, p. 729), to the advent of determinant sentencing, resulting in shifting sentencing discretion away from the courts to the prosecutor (Vorenberg, 1981, p. 1525, 1529). This research hypothesized that community prosecution represents another development that will result in increasing the influence of the office of the prosecutor. Traditionally, prosecutors have been oriented toward successful case disposition. The case-by-case methodology has involved little contact with the community. In addition, the prosecutorial focal point is on felony cases, while lower level offenses generally receive little time or attention. The emergence of community prosecution challenges the traditional prosecution role and its emphasis on the more serious matters and winning cases, and promises positive effects for the "communities" targeted. Through a case study of its application in Kings County, New York, this dissertation explores community prosecution and its impact on the role of the prosecutor and for the community, in the context of a community court implemented in Red Hook, Brooklyn. Focusing on the Red Hook example, the study drew on three principal sources of data to examine the community prosecution innovation, including: a) arrest data, aggregated monthly, for the three police precincts that handle cases originating in Red Hook, covering the years 1998 through 2001 (46 months per precinct, n=138 ); b) precinct level arrest and court case filings for criminal incidents that took place in Red Hook and other Kings County locations for two distinct time periods (the third quarter of 1998, (n = 19,296) and the first quarter of 2001, (n = 22,988)); and c) court case data from the Red Hook Community Justice Center (hereafter, RHCJC) 2000 through 2001 (51 weeks, n=4,088). Several different types of complementary analyses, including HLM, contrasted changes in case types and defendant characteristics in the study locale over time associated with this community-oriented form of prosecution. The analyses also compared these changes to the caseloads from neighboring communities that did not have access to this innovation, where cases were processed in the traditional manner. Specific hypotheses tested about the effects of the community prosecution innovation included the following: 1) Implementation of the community prosecution initiative via the community court will result in an increase in the volume and/or proportion of arrests for minor offenses in precincts operating within the community court's jurisdiction. That increase will not be experienced by precincts not involved with the court. 2) The community prosecution strategy will draw defendants into the Red Hook criminal justice system who would not otherwise have been involved in the system, specifically including greater proportions of young minority males and individuals with no prior criminal histories. This research also involved a limited inquiry into how community members were responding to the community prosecution initiative. Given the purpose of community prosecution, to engage the community in handling its unique crime problems in an effort to make them feel safer, it was of interest to know whether there was any evidence that this happened in Red Hook. To that end, the research drew upon qualitative data, including: a) a series of non-probability based community surveys performed within the Red Hook jurisdiction in 1999 (n=980), 2000 (n=1,744) and 2001 (n=1,169) and b) two focus groups (n=12; n=18) conducted by this researcher in May of 2003. These other data sources provided context, allowing for better understanding the results of the analyses. Findings indicated slight effects of community prosecution in the anticipated direction: The volume of arrests from the Red Hook precincts (Data Set 1) increased slightly after the court was implemented. In addition, findings from the RHCJC caseload (Data Set 3) indicated that post-implementation, misdemeanor cases increased slightly but significantly. Comparisons of the post-implementation caseload filed from Red Hook precinct arrests with the control group (consisting of pre-implementation, Red Hook filings and both pre-and post-implementation filings from the arrests made by the rest of the Kings County precincts (Data Set 2)) indicated that the caseload proportion of misdemeanors in post-implementation Red Hook filings increased significantly when compared with the control group filings. In addition, analysis of Data Set 2 (comparison of caseload characteristics) indicated both a significant increase in the proportion of the post-implementation, Red Hook cases made up of Hispanic defendants, and a significant increase in the caseload proportion consisting of defendants with no prior record of criminal convictions. The primary findings from the qualitative data (Survey and Focus Group Data) indicated that community respondents appeared to be more satisfied with the court system and seemed to feel safer after the RHCJC was implemented. There was also some indication of race based differences in responses: White respondents seemed generally more positive about perceived post-implementation changes in Red Hook than minority respondents.