How Do Selected Novice Middle School Teachers from Various Certification Pathways Perceive the Effectiveness of Their Teacher Preparation? 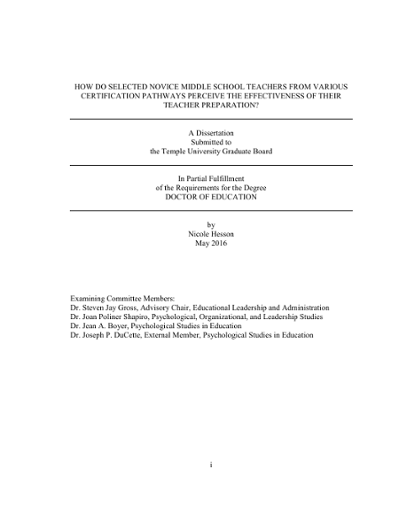 This dissertation study compared the three most common pathways of traditional preparation for novice middle level teachers (elementary, middle level, and secondary) and attempted to answer the central question of which group felt best prepared for middle level teaching. Selected novice teachers from each of the three pathways were interviewed and asked to reflect on their preparation program. All participants were graduates of the same large, urban, public university. Data were collected using an interpretivism paradigm and analyzed using the constant comparative method. The state has recently redesigned its certification structure and teacher education institutions have redesigned their programs to reflect these changes. This study sought to discover if the restructuring resulted in greater feelings of preparedness among novice teachers. This study was exploratory, but initial findings indicate that there was very little difference in feelings of preparedness among the three pathways for teaching at the middle level with respect to program components and understanding of the needs of middle level adolescents. There was limited difference among the three pathways with respect to content preparation. This poses an interesting policy question: If the state’s intent in restructuring the certification tiers was to ensure more prepared teachers for the middle level and this exploratory study shows little difference in feelings of preparation, was the decision to restructure teacher certification a worthwhile endeavor? The study offers possible programmatic changes to increase feelings of preparedness as well as ideas for further research around this topic.