A Science of Literature: Ethnology and the Collection of Indigenous Oral Traditions in the United States 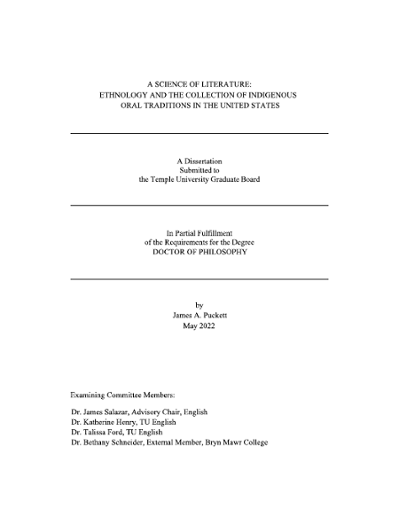 In A Science of Literature, I examine how and why US ethnologists and popular authors of the nineteenth and early-twentieth centuries collected, read, and interpreted Indigenous oral traditions as works of literature. “Oral traditions” in this case refers to the narratives and songs that Indigenous peoples maintained mostly orally, and which variously served religious, historical, philosophical, educational, and entertainment purposes within Indigenous communities. I track how, through the collection process, Euro-American authors transformed oral traditions into “Indian oral literature,” (re)writing versions of oral traditions that aligned with Western literary categories and attitudes toward the “primitive.” For the most part, this reconceptualization, I argue, worked to discredit oral traditions as bodies of knowledge—as works of fiction and poetry, oral traditions became, in effect, untrue—and it supported removal and assimilation efforts in so far as it was used to shed light on a primitive Indian psychology, one that was naturally poetic, but not rational, not scientific. And yet many Indigenous writers, like George Copway and Zitkala-Ša, took advantage of the popularity of Indian oral literature to produce their own print collections of oral traditions. I analyze these collections as works of Indigenous “counter science.” I show how Indigenous writers, for example, moved from informant to ethnologist as they cited, summarized, and transcribed oral traditions as tribal records (histories, maps, deeds) and later as works of moral philosophy, thus explicitly contesting their interpretation as merely works of the imagination. Oral traditions, as I argue, have functioned as important resources to which Indigenous and non-Indigenous writers alike turned to validate scientific and literary practices, to contest the history of colonization, and to debate US-Indian relations.