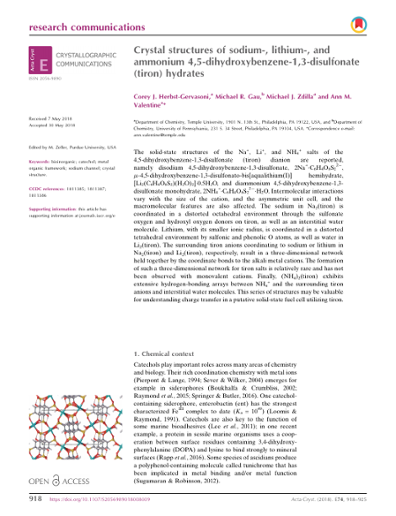 © Herbst-Gervasoni et al. 2018. The solid-state structures of the Na+, Li+, and NH4+ salts of the 4,5-dihydroxybenzene-1,3-disulfonate (tiron) dianion are reported, namely disodium 4,5-dihydroxybenzene-1,3-disulfonate, 2Na+·C6H4O8S22-, μ-4,5-dihydroxybenzene-1,3-disulfonato-bis[aqualithium(I)] hemihydrate, [Li2(C6H4O8S2)(H2O)2]·0.5H2O, and diammonium 4,5-dihydroxybenzene-1,3-disulfonate monohydrate, 2NH4+·C6H4O8S22-·H2O. Intermolecular interactions vary with the size of the cation, and the asymmetric unit cell, and the macromolecular features are also affected. The sodium in Na2(tiron) is coordinated in a distorted octahedral environment through the sulfonate oxygen and hydroxyl oxygen donors on tiron, as well as an interstitial water molecule. Lithium, with its smaller ionic radius, is coordinated in a distorted tetrahedral environment by sulfonic and phenolic O atoms, as well as water in Li2(tiron). The surrounding tiron anions coordinating to sodium or lithium in Na2(tiron) and Li2(tiron), respectively, result in a three-dimensional network held together by the coordinate bonds to the alkali metal cations. The formation of such a three-dimensional network for tiron salts is relatively rare and has not been observed with monovalent cations. Finally, (NH4)2(tiron) exhibits extensive hydrogen-bonding arrays between NH4+ and the surrounding tiron anions and interstitial water molecules. This series of structures may be valuable for understanding charge transfer in a putative solid-state fuel cell utilizing tiron.