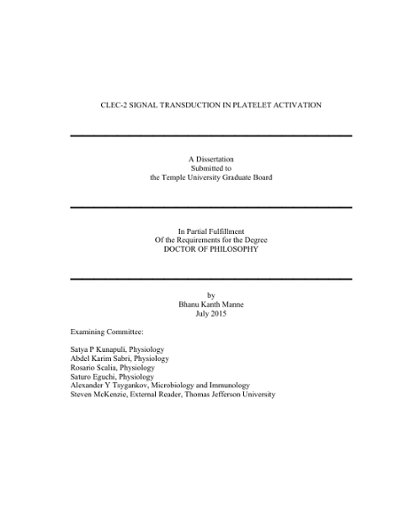 Platelets are involved in many processes ranging from fighting microbial infections and triggering inflammation to promoting tumor angiogenesis and metastasis. Nevertheless, the primary physiological function of platelets is to act as essential mediators in maintaining homeostasis of the circulatory system by forming hemostatic thrombi that prevent blood loss and maintain vascular integrity. CLEC-2 is a C-type lectin-like receptor that is highly expressed in platelets and lesser extent, in other cell types such as activated dendritic cells and B cells. Rhodocytin was the first ligand used to identify CLEC-2 receptor and it’s signaling on platelets. In the first chapter we identified a new agonist for CLEC-2 receptor. Fucoidan, a sulfated polysaccharide from fucus vesiculosus, decreases bleeding time and clotting time in hemophilia, possibly through inhibition of tissue factor pathway inhibitor. However, its effect on platelets and the receptor by which fucoidan induces cellular processes has not been elucidated. In this study, we demonstrate that fucoidan induces platelet activation in a concentration-dependent manner. Fucoidan-induced platelet activation was completely abolished by the pan-Src family kinase (SFK) inhibitor, PP2, or when Syk is inhibited. PP2 abolished phosphorylation of Syk and Phospholipase Cγ−2. Fucoidan-induced platelet activation had a lag phase, which is reminiscent of platelet activation by collagen and CLEC-2 receptor agonists. Platelet activation by fucoidan was only slightly inhibited in FcRγ chain null mice, indicating that fucoidan was not acting primarily through GPVI receptor. On the other hand, fucoidan-induced platelet activation was inhibited in platelet-specific CLEC-2 knock-out murine platelets revealing CLEC-2 as a physiological target of fucoidan. Thus, our data show fucoidan as a novel CLEC-2 receptor agonist that activates platelets through a SFK-dependent signaling pathway. Furthermore, the efficacy of fucoidan in hemophilia raises the possibility that decreased bleeding times could be achieved through activation of platelets. Lipid rafts are distinct areas of the plasma membrane implicated in the regulation of signaling in a variety of cells including platelets. A previous study C-type lectin like receptor 2 (CLEC-2) has been reported to activate platelets through a lipid raft-dependent manner. Secreted ADP potentiates CLEC-2-mediated platelet aggregation. We have investigated whether the decrease in CLEC-2-mediated platelet aggregation, previously reported in platelets with disrupted rafts, is a result of the loss of agonist potentiation by ADP. We disrupted platelet lipid rafts with methyl-β-cyclodextrin (MβCD) and measured signaling events downstream of CLEC-2 activation. Lipid raft disruption decreases platelet aggregation induced by CLEC-2 agonists. The inhibition of platelet aggregation by the disruption of lipid rafts was rescued by the exogenous addition of epinephrine but not 2-methylthioadenosine diphosphate (2MeSADP), which suggests that lipid raft disruption effects P2Y12-mediated Gi activation but not Gz. Phosphorylation of Syk (Y525/526) and PLCγ2 (Y759), were not affected by raft disruption in CLEC-2 agonist-stimulated platelets. Furthermore, tyrosine phosphorylation of the CLEC-2 hemi-ITAM was not effected when MβCD disrupts lipid rafts. Lipid rafts do not directly contribute to CLEC-2 receptor activation in platelets. The effects of disruption of lipid rafts in in vitro assays can be attributed to inhibition of ADP feedback that potentiates CLEC-2 signaling. Tyrosine kinase pathways are known to play an important role in the activation of platelets. In particular, the GPVI and CLEC-2 receptors are known to activate Syk upon tyrosine phosphorylation of an Immune Tyrosine Activation Motif (ITAM) and hemi-ITAM, respectively. However, unlike GPVI, the CLEC-2 receptor contains only one tyrosine motif in the intracellular domain. The mechanisms by which this receptor activates Syk are not completely understood. In chapter 3, we identified a novel signaling mechanism in CLEC-2-mediated Syk activation. CLEC-2-mediated, but not GPVI-mediated, platelet activation and Syk phosphorylation were abolished by inhibition of PI3-Kinase, which demonstrates that PI3-Kinase regulates Syk downstream of CLEC-2. Ibrutinib, a Tec family kinase inhibitor, also completely abolished CLEC-2-mediated aggregation and Syk phosphorylation in human and murine platelets. Furthermore, embryos lacking both Btk and Tec exhibited cutaneous edema associated with blood-filled vessels in a typical lymphatic pattern similar to CLEC-2 or Syk-deficient embryos. Thus our data show, for the first time, that PI3-Kinase and Tec family kinases play a crucial role in the regulation of platelet activation and Syk phosphorylation downstream of CLEC-2 receptor.