SHOULD WE GIVE A GRIT ABOUT MOVEMENT? EXAMINING THE RELATIONSHIPS AMONG MINDSET, GRIT, SELF-EFFICACY, AND EXERCISE BEHAVIOR 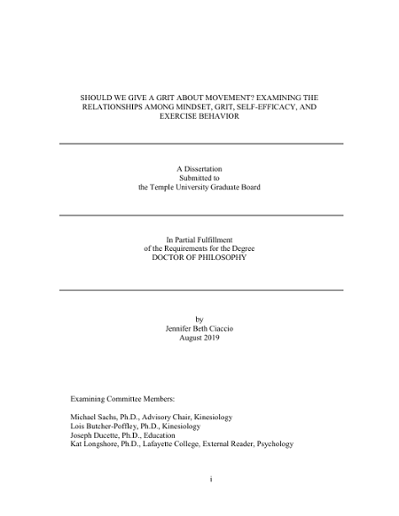 Researchers and health care professionals agree that living an inactive lifestyle negatively impacts individuals and communities (Centers for Disease Control and Prevention [CDC], 2018; Lee et al., 2012), and ongoing research highlights the benefits for adults achieving a recommended 150 minutes of physical activity (PA) per week (CDC, 2018; US Department of Health and Human Services [HHS], 2018; Warburton, Nicol, & Bredin, 2006). However, despite these benefits, only 20% of individuals comply with these recommendations (American College Health Association [ACHA], 2017; Blackwell & Clarke, 2018; HHS, 2018). A recent area of research to address this issue explores psychological non-cognitive skills in predicting exercise behavior (Orvidas et al., 2018; Walton, 2014; Wilson, 2006; Yeager & Walton, 2011). The current study explored the relationships among college student exercise behavior and non-cognitive skills: exercise self-efficacy, grit, and mindset. In Phase 1 (quantitative portion) of the study, participants (N = 366) completed a survey online assessing the above variables as well as collecting various demographic information. In Phase 2 (qualitative portion), participants (n = 10) were interviewed to further explore the variables and potentially help explain the quantitative results. Phase 1 data were analyzed through Pearson correlations, linear and multiple regressions, and MANOVAs. Results showed that Grit (Grit-S), Grit-Perseverance (Grit-P), Mindset (ITF), and Exercise Self-Efficacy (ESE) were significantly positively correlated with college student exercise behavior; however, all correlations were weak, with the exception of ESE being moderately correlated. Grit-Interest (Grit-I) was not significantly correlated. Furthermore, the results of the regression analysis showed only ESE making a significant contribution to the variance, further suggesting it as a moderately strong predictor of exercise behavior. In terms of the relationship between the variables, results showed that Grit-S was significantly strongly positively related to Grit-P and Grit-I and significantly, but weakly, positively related to ITF and ESE. In addition, ITF and ESE were significantly, but weakly, positively related. Finally, the sample was split into three groups: Insufficiently Active (IA), Active (A), and Highly Active (HA) based on adapted HHS 2018 PA Guidelines. Overall, the groups were significantly different. Specifically, the HA group reported significantly higher Grit, Grit-P, Mindset, and ESE than the IA group. The A group was only significantly different from IA and HA groups for ESE. However, the differences, again, had marginal effect with the exception of ESE. The current study reinforces the importance of ESE in exercise behavior, which seems to hold true for college students. In addition, it sheds light on the domain-specificity of non-cognitive skills, the need for continued analysis of measurement scales, the uni- or multi-dimensionality of constructs, particularly Grit, and the necessity of further research on the connection between non-cognitive skills and exercise behavior. Keywords: Grit, mindset, self-efficacy, non-cognitive skills, exercise behavior, college students, perseverance, goal-setting