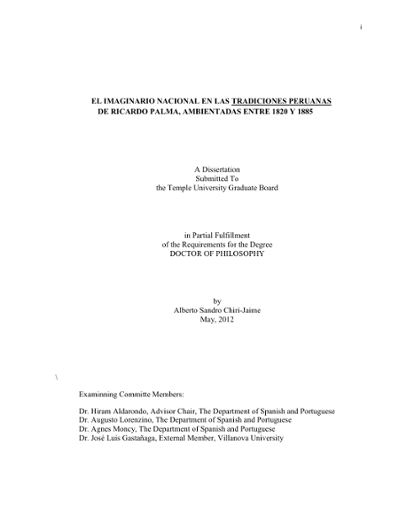 The following study analyzes the national imaginary that emerges from the Tradiciones Peruanas, written by Peruvian Ricardo Palma (Lima, 1833-1919). The selected set of traditions is based on historical reference ranging between the years of 1820 to 1885. The research is organized into four chapters. The first chapter is an introduction with special emphasis on the theoretical framework, the state of the question, and the civic, aesthetic and ideological reasons that led Ricardo Palma to write the chosen corpus. The second chapter looks to the traditions that allude the presence of Argentine general Don José de San Martín and the Venezuelan liberator Simón Bolívar in the different instants -from the prior years to the subsequent years- of the emancipation process in Peru, ranging from 1820 to 1827. The third chapter refers to the literary version of what history has called the First Peruvian Militarism (1827-1883) and which Palma rewrites with all the tones of anarchy, anecdote, festivity and political apprenticeship that led to the construction of the nineteenth-century Peruvian Republic. Finally, the fourth chapter looks into the symbolic and literary representation corresponding to the traditions about the War of the Pacific (1879-1883), which are the most bloody and tragic years of nineteenth century Peru. Classical and representative texts of Peruvian literature are used to support the study as well as authorized criticism about Palma, ranging from the early testimonies of his son Clemente, and his daughter Angélica Palma, going through the essays of José de la Riva Agüero, José Carlos Mariátegui, Raúl Porras Barrenechea, Luis Alberto Sánchez, Estuardo Núñez, Wáshington Delgado, José Miguel Oviedo, Antonio Cornejo Polar, Julio Ortega to the meticulous contributions of Juan Díaz Falconí and Oswaldo Holguín Callo. In the same way, the study uses the contribution of historiography, specially from the texts of Jorge Basadre, Alberto Flores Galindo, Peter Klarén, Carmen McEvoy, and Juan Fonseca. Finally, the theory and reflection of postcolonial history supports the study with the texts of Ernest Renan, Benedict Anderson, Doris Summer, Friedhelm Schmidt-Welle, among others.