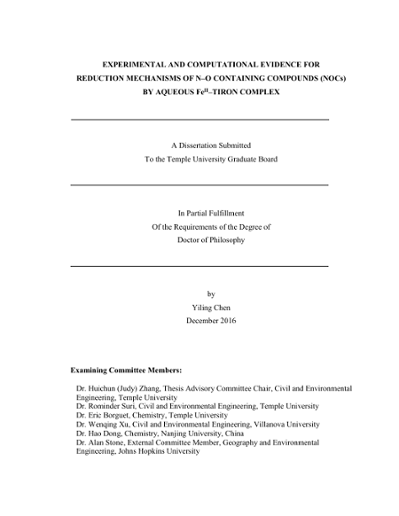 The nitrogen–oxygen single bond (&gt;N–O–) is commonly found in organic contaminants ranging from aromatic N–oxides (ANOs), oximes, isoxazoles, to hydroxylamines. The introduction of N–O containing contaminants (NOCs) such as pesticides, pharmaceuticals, and reaction intermediates into aquatic environments is arguably an important emerging water issue. Soluble FeII and natural organic ligands, commonly co-existing in reducing environments, have been found to quickly reduce a number of organic contaminants in anoxic aqueous solution due to their low reduction potentials and high redox reactivity. The major objective of this research was to understand the reduction kinetics and mechanisms of various NOCs by FeII–tiron complex, a highly reactive, homogenous model environmental reductant. Experimental results show that various NOCs were reduced by FeII–tiron complex at different rates. The 1:2 FeII–tiron complex, FeL26-, is the dominant reactive species because its concentration highly correlated with the observed NOC reactivity. Depending on the structure, NOCs may undergo different reaction pathways, and the rate-limiting steps can be protonation, complexation, electron transfer or N–O bond cleavage. Specifically, for ANOs, three types of complexes can form between ANOs and FeII–tiron, leading to different reactivity and mechanisms: type I refers to those forming 5-membered ring complexes through the N and O atoms on the side chain; type II refers to those forming 6-membered ring complexes through the N-oxide O atom and the O atom on the side chain; and type III refers to complexation through the N-oxide O atom only. The density functional theory calculations suggested that the elementary reactions, including protonation, N–O bond cleavage, and the 2nd electron transfer processes, are barrierless, indicating that the first electron transfer is rate-limiting. Consistent with the theoretical results, the experimental solvent isotope effect, KIEH, for the reduction of quinoline N-oxide (a type III ANO) was obtained to be 1.072 ± 0.025, suggesting protonation was not involved in the rate-limiting step. The measured nitrogen kinetic isotope effect, KIEN, for the reduction of pyridine N-oxide (a type III ANO) (1.022 ± 0.006) is in good agreement with the calculated KIEN for its first electron transfer (1.011 ~ 1.028), confirming that the first electron transfer is rate-limiting. Electrochemical cell experiments demonstrated that the electron transfer process can be facilitated significantly by type I complexation with FeL26-, to some extent by type II complexation with free FeII, but not by weak type III complexation. Reduction products of several ANOs were identified by HPLC and LC-QToF-MS to be the deoxygenated analogs. Similar to ANOs, reduction products of various substituted isoxazoles (ISXs) were identified by HPLC/QToF-MS to be the ring-cleavage analogs. The density functional theory calculations suggested that the elementary protonation processes are barrierless, while the N–O bond cleavage processes have small energy barriers, suggesting they are not the rate-limiting step. The experimental iron kinetic isotope effects, KIEFe, for the reduction of 3-amino-5-methylisoxazole (AMX) and 3,5-dimethylisoxazole (DMX) were obtained to be 1.0076 ± 0.0049 and 1.0075 ± 0.0018. Both numbers revealed that FeII participated in the rate-limiting step, demonstrating that the electron transfer step is rate-limiting. Meanwhile, KIEH for the reduction of AMX was obtained to be 1.992 ± 0.068, indicating that proton is involved in the rate-limiting step, while that for DMX was 1.209 ± 0.079, suggesting no protonation is involved in the rate-limiting step. Thus, the reduction of AMX and DMX undergoes different pathways. Ring complexes formed between ISXs and FeII–tiron species can be categorized into three types: type I complex forms through 3-N and ring-O; type II complex forms through 5-N/O and ring-N; and type III complex forms through 6-O and ring-N. However, complexation only occured after ring cleavage due to the lower energies calculated for the ring-opened complexes. Electrochemical cell experiments revealed that the electron transfer process can be facilitated by various types of complexation at different levels. The kobs of type I or II ISXs increased a few times as [FeII] increased significantly in the cathodic cell, suggesting that the reduction can be accelerated by either type I or II complexation with free FeII to some extent. Meanwhile, the significantly higher kobs of ISXs in the batch experiments than that in the cell experiments indicated that type I and type II-N complexation with FeL26- can strongly facilitate ISX degradation. Based on these findings, future work will rely on both experimental and computational approaches to examine the reduction kinetics and mechanisms of other categories of NOCs. Upon successfully elucidating the rate-limiting step for each group of NOC, various molecular descriptors will be examined to develop QSARs as predictive tools for reducing activity of other structurally-related NOCs. Overall, this project has provided a wealth of new mechanistic information on the transformation of NOCs in model aquatic environments, which will enable researchers and regulatory agencies to develop environmental fate simulators to accurately assess their fate in and possible risks to water supply and environmental systems.