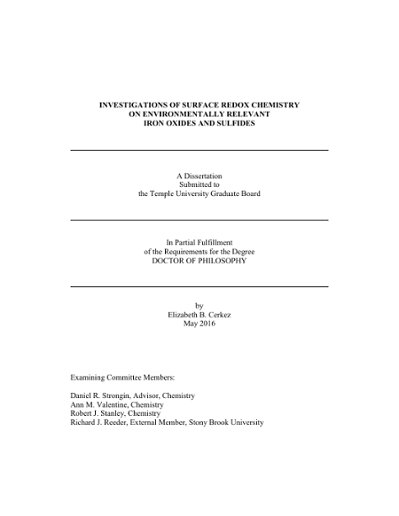 Important reactions in the environment often occur at the interface between a mineral surface and aqueous phase. Reactions occurring at this interface often control the uptake or release of harmful components resulting in the geochemical cycling of elements in the environment. Additionally, minerals are commonly used in the remediation of contaminated areas, where similar chemistry occurs at their interfaces. Thus, studies of the chemistry of these interfaces are essential to our understanding of complex environments. Many of these processes are controlled by electron transfer reactions between adsorbates and the mineral interface, and it is here where this research presented will concentrate. The studies in this thesis key in on redox chemistry on various environmentally relevant iron minerals, including ferrihydrite, pyrite, and amorphous iron sulfide. A large portion of this body of work is dedicated to the understanding of the surface mediated reaction between chromate (Cr(VI)) and arsenite (As(III)). Both of these species are present in the environment and are detrimental to human health. Using in- and ex-situ experiments we have monitored the coupled redox transformation of Cr(VI) and As(III) to chromite (Cr(III)) and arsenate (As(V)). Quantum mechanical modeling was used to support the experimental studies of this novel redox chemistry. The reaction was monitored in situ, using attenuated total reflectance Fourier transform infrared spectroscopy (ATR-FTIR), on the surface of the iron oxyhydroxide, ferrihydrite, at various solution pH values by following vibrational modes unique to Cr(VI), As(III), and As(V). At pH &lt; 9 we observed an initial growth of Cr(VI) vibrational modes due to adsorption, followed by the simultaneous decrease in Cr(VI) vibrational modes and increase in As(V) vibrational modes. Ex situ analysis of the reaction products via X-ray absorption spectroscopy (XAS) and X-ray photoelectron spectroscopy (XPS) indicated that there was an increase in the percentage of reaction products as the pH decreased. Quantum mechanical calculations were completed to model the reaction of Cr(VI) and As(III) on the ferrihydrite surface by analyzing differences in geometric and electronic structural changes and thermodynamic preferences. The results indicate that Cr(VI) and As(III) adsorbed physically separated from each other is not only thermodynamically favorable but results in changes in As(III)-Fe and Cr(VI)-Fe atomic distances, towards those characteristic of As(V)-Fe and Cr(III)-Fe. Thus a mechanism where electron transport occurs through bulk states is plausible. Additionally, natural bond order analysis reveals a redistribution of electron density away from the Cr(VI) atomic center upon adsorption, indicating probable changes in Cr(VI) reduction potential. The electrochemical reduction of Cr(VI) on three surfaces, ferrihydrite, titanium dioxide, and aluminum oxides, indicate that Cr(VI) reduction potential is surface dependent, an observation that has significance for redox chemistry in the environment. The interaction of ferric, Fe(III), with iron sulfide surfaces (during and after coal mining activities) contributes to the detrimental environmental problem known as acid mine drainage (AMD). We investigated whether Fe(III) chelating siderophores could be used to suppress the oxidation of iron sulfide surfaces and the resulting AMD chemistry. The exposure of the iron sulfide, pyrite, to the siderophore, desferrioxamine B (DFOB) at initial pH values of 3, 6, and 8 under oxic conditions showed a significant decrease in the rate of dissolution of pyrite: decreases of 43.7%, 37.5% and 78.4%, respectively. An even greater decrease in pyrite oxidation was observed when DFOB was present in anoxic conditions, specifically 56.1%, 74.4% and 91.5%, at pH 3, 6 and 8, respectively. We further compared the rate of dissolution between DFOB and another siderophore, enterobactin, which is a stronger chelator of Fe(III). The presence of enterobactin suppressed pyrite oxidation more than DFOB, consistent with the contention that inhibiting the interaction of Fe(III) with pyrite will decrease the oxidation of the mineral. We also analyzed the exposure of the pyrite surface to DFOB using ATR-FTIR, to determine if any surface chelation occurs. We found that when Fe(III) is present on the pyrite surface, DFOB adsorbs to the surface via hydroxamate groups, similar to the aqueous phase spectra of DFOB-Fe(III) complex. In contrast the spectra do not exhibit hydroxamate vibrational modes when Fe(III) was not initially present on the pyrite surface and in this circumstance the spectra resembled that of aqueous phase unchelated DFOB. Taken together the results showed that siderophore inhibited pyrite oxidation by chelating Fe(III) present on the pyrite surface and in solution. Finally, the reduction of NO(g) to NH3/NH4+ with amorphous iron sulfide (FeS) was studied. The exposure of NO gas to a suspension of FeS solid resulted in the conversion of 2.3% NO(g) to the reaction product ammonia (NH3), which was found to grow over time, while the exposure of NO(g) to water (in the absence of mineral) resulted in no NH3 formation. Additionally, we completed in situ analysis of NO exposure to FeS as a function of water concentration using ATR-FTIR. The exposure of NO to an aqueous paste of FeS or a FeS film (with adsorbed H2O), resulted in the adsorption of NO to the FeS surface and the subsequent production of NH3, as indicated by N-H vibrational modes. In contrast, the removal of all water, via thermal desorption from the film, resulted in the adsorption of NO but did not show vibrational modes consistent with the formation of NH3. We conclude that the presence of H2O, as a source of protons, and a FeS surface, as a source of electrons, results in the transformation of NO to NH3 via a heterogeneous reaction. This result has important implications towards remediation of NOx gases and mechanisms of prebiotic synthesis of NH3. In summary, the research presented expands our understanding of redox reactions at mineral interfaces in the environment. The work herein aims to inform and aid in the development of remediation methods for arsenic and chromium, the formulation of methods to inhibit the production of acid mine drainage, and develop our understanding of toxic NOx gas reduction on surfaces.