10 Years in Review: A Contextual Critique of Educational Reform Efforts in the Harrisburg School District 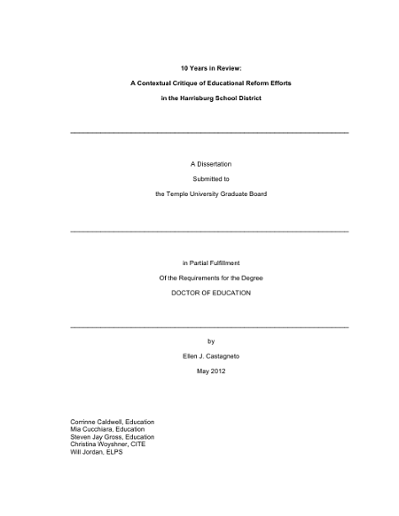 This qualitative case study examined a single phenomenon that of a decade of public school reform efforts via legislated takeover in an urban poor minority school district, 1999-2009. The Harrisburg School District (HSD) is situated within the Capitol City of the Commonwealth of Pennsylvania and educates one of the highest rates of poverty and minority populations in the country. The HSD has the lowest student achievement scores in the state, despite 10 years of restructuring efforts, a legislated state takeover given over to Mayoral control, increased funding, and leadership reorganization. A contextual critique of political and sociological factors was conducted, illuminating an overview of conditions, events and retrospective perceptions. Two types of data were collected, documents and participant interviews. Documents collected included: media sources, legislation, community postings, district and Department of Education documents, university studies, student achievement data, cases studies conducted during the 10 year era, and literature related to individuals that had involvement in the governance of the district. 25 individuals were interviewed to obtain their perceptions of events across the decade. Respondents represented those of high to low governance, employees and community members. Documents and impressions were analyzed through both a circulatory and constant comparative method. Timelines, chronologies and perceptions were merged, converged, deconstructed and reconstructed producing continuum themes of hope and despair and back again. Results revealed three eras: 1) A period of Great Expectations, 1998-2001, prior to and during the early takeover, where community involvement was active, test scores were beginning to rise and state support with increased funding was available; 2) A period of Rough Terrain, 2002-2008, the disillusion and desolation of the takeover, where constituents were uninvolved, funding improvements not realized, and participants expressed oppression, disenfranchisement, and allegations of powerful elites making profit; and 3) A period of Rising Hope, 2007-2009, the metamorphosing of the takeover, where community involvement in the politics of ousting the more than 2-decade incumbent mayor produced hope in the change that was coming, making conditions more tolerable. Despite efforts, student achievement remained the lowest in the state.