Effect of Morphine on Immune Responses and Infection 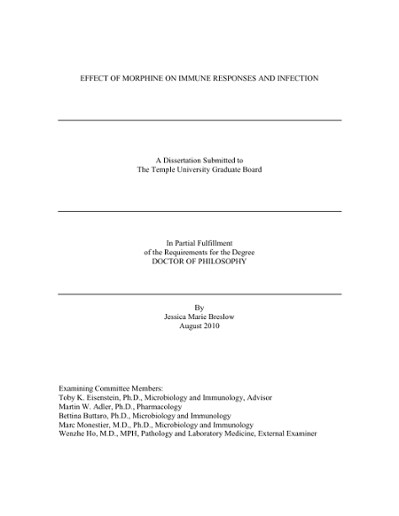 Opioids have been shown to modulate immune function in a variety of assays and animal models. In a more limited number of studies, opioids have been shown to sensitize to infection. Heroin, the prototypical opioid drug of abuse, is rapidly metabolized to morphine in the body. Morphine has been used as an analgesic for hundreds of years, and continues to be a drug of choice for treating pain in ICU and trauma patients. The continued use of these opioid compounds in humans warrants further investigation of their effect on immune responses against, and progression of, common bacterial infections. Two infections were investigated in this thesis using murine models, Acinetobacter baumannii and Salmonella typhimurium. A recent increase in the prevalence of A. baumannii infections among healthy, but wounded, military personnel, lead to the hypothesis that analgesic morphine might sensitize to infection with this multiply-drug resistant bacterium. A systemic, intraperitoneal A. baumannii infection model was established in mice that resulted in rapid, disseminated disease where animals became septic as organisms replicated in the blood, lungs, and other organs. This model was used to investigate the role of various parameters of innate immune defenses to Acinetobacter. Neutralization of neutrophils by antibody depletion greatly sensitized to this infection. Infection resulted in a rapid, biphasic induction of both IL-17 and the chemokine, KC/CXCL1, a major chemotactic factor for neutrophils, that continued to rise through 18h after bacterial inoculation. However, depletion of either IL-17 or KC/CXCL1 using monoclonal antibodies failed to sensitize to Acinetobacter infection. Further, IL-17 receptor KO mice were not sensitized to this infection. Collectively, these results suggest that there must be other chemotactic factors for neutrophils that can compensate for the absence of IL-17 and KC. Morphine, delivered by extended release pellet, sensitized two strains of mice to two strains of Acinetobacter, as measured by mortality to a sublethal challenge dose, and this effect was blocked by administration of the opioid-receptor antagonist, naltrexone. . Morphine increased Acinetobacter burdens in the organs and blood of infected mice, and increased the levels of pro-inflammatory cytokines. Evidence for an effect of morphine on neutrophil infiltration was obtained. Morphine decreased the total numbers of cells, as well as the total numbers of neutrophils and macrophages infiltrating into the peritoneal cavity. This inhibition of neutrophil accumulation correlated with suppression of levels of both IL-17 and KC/CXCL1. The evidence supports the conclusion that morphine sensitizes to Acinetobacter infection by suppressing the response of neutrophils, potentially via depression of neutrophil chemotactic factors IL-17 and KC. However, taken together with the data above there are probably additional factors in addition to IL-17 and KC that are sensitizing the animals to infection in the presence of morphine. In addition to these studies, the opioid-receptor dependency of morphine-mediated sensitization to Salmonella enteric serovar Typhimurium was examined. Previous experiments had determined that extended release morphine pellets sensitized mice to a sublethal dose of Salmonella, as determined by survival and bacterial burdens in the organs of infected mice, but naltrexone resulted in only incomplete reversal of the morphine-mediated effects. To further characterize the receptor dependency of the observed phenomenon, mu-opioid receptor knockout (MORKO) mice were used. MORKO mice were found to be completely resistant to the lethal effects of morphine plus infection observed in wild-type (WT) mice. In addition, MORKO mice showed greatly reduced bacterial burdens and pro-inflammatory cytokine levels when treated with morphine and challenged with a sublethal challenge dose of Salmonella, in comparison to WT mice. In summary, the studies presented in this thesis explored basic mechanisms of innate immunity to A. baumannii using a systemic model of infection. The work provides additional evidence that morphine sensitizes to infection, using models of Acinetobacter and Salmonella in mice. An implication of this work is use of caution in the administration of opioids in patients that are susceptible to opportunistic infections.