Cross-Linguistic Influences on English Loanword Learnability in the Japanese Context 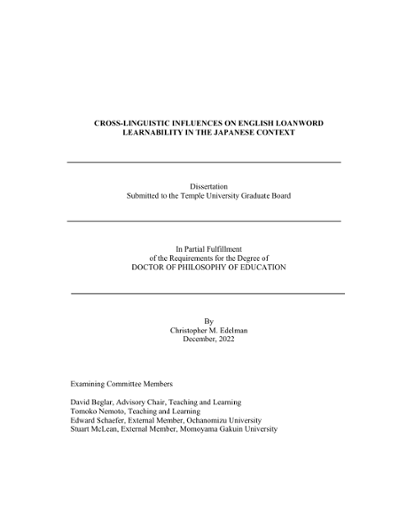 This study was an investigation into the aural and written receptive knowledge of the English semantics of English lexis that is loanwords in the Japanese language and the predictive strength of the variables of semantic distance, concreteness/abstractness, polysemy, phonological distance, number of syllables, number of phonemes, number of letters, part of speech (POS), English Frequency, and frequency in Japanese in relation to accurate semantic knowledge. The participants (N = 215) were first- and second-year, non-English majors at a large university in Western Japan. The participants were from 10 intact English classes focused on reading, writing, and communication skills. Data were collected using eight instruments: the Listening Vocabulary Levels Test, Aural Loanword Test, Aural Non-Loanword Test, New Vocabulary Levels Test, Written Loanword Test, Written Non-Loanword Test, and Japanese Loanword Frequency Rating Task. Additionally, data were collected from five Japanese L1 speakers highly proficient at English on the Semantic Distance Rating Task. The data were first analyzed using the Rasch dichotomous model to examine instrument reliability and validity as well as to transform the data into Rasch person ability estimates and Rasch item ability estimates. Pearson correlations were used to determine the strength of the relationship between loanwords and non-loanwords. Repeated-measures ANOVA—with follow up t-tests were used to determine the differences between the four semantic tests: the Aural Loanword Test, the Aural Non-Loanword Test, the Written Loanword Test, and the Written Non-Loanword Test. Four multiple linear regression analyses were conducted using the predictor variables semantic distance, concreteness/abstractness, phonological distance, number of syllables, number of phonemes, number of letters, part of speech, English Frequency, and frequency in Japanese. The results of the Pearson analyses showed strong correlations between the aural and written loanword and non-loanword measures. This finding indicated that the participants’ knowledge of loanwords was relatively equivalent to their knowledge of non-loanwords. The results of the comparison between aural and written loanword knowledge showed that written knowledge of loanwords was greater than aural knowledge of loanwords. Further comparisons between the loanword and non-loanword tests showed that receptive aural non-loanword knowledge was greater than aural loanword knowledge, and that written non-loanword knowledge was greater than written loanword knowledge. These comparisons showed that English semantic knowledge of loanwords was less accurate than that of non-loanwords, which implied that the accurate acquisition of English semantic knowledge of loanwords was impeded by Japanese L1 lexical knowledge. The results of the multiple regressions indicated that the only substantial predictor of lexical acquisition for both loanwords and non-loanwords in both modalities (aural and written) was English Frequency. Although the effect size of English frequency was substantial, it was less so on the aural and written loanword measures. This finding implied that English linguistic gains of repeated exposure were most likely muted by entrenched L1 semantic knowledge. Overall, the results showed that loanwords are generally acquired with greater difficulty than non-loanwords and that they should not always be considered a form of receptive knowledge of English lexis.