The Effects of Physical Growth on Gait Stability in Adolescent Athletes 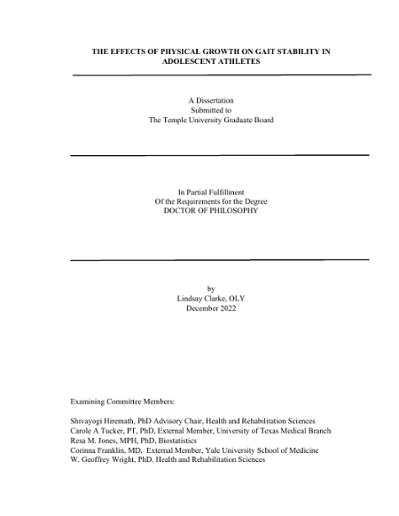 Background: Youth sports participation has numerous positive mental and physical health benefits. In young athletes, injuries result in millions of emergency room visits and millions of dollars spent every year offsetting many of the positive benefits gained by participation in sports. An increase in traumatic injury rates has been found to occur during the year of peak height growth (PHV), with a subsequent increase in risk of overuse injury in the years immediately following. This may be the result of changes to movement coordination around the time of adolescent growth spurts, a phenomenon called adolescent motor awkwardness (AMA). Though this phenomenon is well known to parents and coaches of young athletes, scientific research into its causes, symptoms, and timeline remains sparse. Minimal scientific evidence exists to quantify the impact of AMA on specific areas of movement coordination (ex. gait) and muscle performance, as well as its relation to growth spurts. Equally as poorly understood are the potential causes of motor disruptions during this period. As adolescents experience a wide variety of alterations to body size, proportions, and composition during puberty, there are many factors which could lead to disruptions to movement coordination. Additionally, there are substantial differences which arise in body proportions and composition between the sexes during puberty, yet any between-sex-group differences in the timeline, causes, or specific changes to movement coordination have not yet been explored. Purpose: The purpose of this dissertation was threefold: 1) To understand how gait stability changes with age and height during adolescence, and how these changes differ between the sexes (aim 1; chapter 2); 2) To understand the immediate effects of physical growth on gait smoothness during adolescence (aim 2; chapter 3); 3) To understand how peripheral fatigue affects gait smoothness during adolescence, and to understand how physical growth impacts muscular fatigability (aim 3; chapter 4). Participants: Sixty-Seven individuals (n=34 female, n=33 male) participated in the first study session to obtain Harmonic Ratio (HR), age, height, and fatigue data for aims 1 and 3. A subset of 46 participants (n=20 female, n=26 male) returned to participate in a second study session to obtain growth rate, HR, and fatigue data for aims 2 and 3. Methods: The testing protocol used in both sessions was identical. Trigno sensors were adhered to the participants skin at four locations determined by manual palpation: C7, L5, and the right and left rectus femoris. Once sensors were secured, participants completed a 15-minute treadmill warm-up in which their self-reported preferred walking speed was obtained. Following the warm-up, participants completed two 9-minute treadmill walking trials at three set speeds: 70% (slow walking speed; SWS), 100% (preferred walking speed; PWS), and 130% (Fast Walking Speed; FWS) of preferred walking speed. The walking trials were separated by a 10-minute leg-focused fatigue protocol. During each walking trial, accelerations of the upper (C7) and lower (L5) trunk were recorded in three planes of motion: Anterior-Posterior (AP), Medio-Lateral (ML), and Vertical (V). Harmonic Ratios were calculated from these acceleration signals. Prior to beginning each walking trial (i.e., pre-fatigue and post-fatigue) surface electromyography (sEMG) of the right and left rectus femoris was obtained during a 10-second sustained maximal contraction. Median frequency (Fmed) of this sEMG signal was used to calculate muscular fatigue level before and after the fatiguing protocol. Descriptive statistics were calculated for both the first session group and the second session subgroup. To accomplish aim 1, relationships between age, height, and HRs were assessed using multiple linear regression models with Holm-Bonferroni correction. Gait and anthropometric characteristics were compared by sex using independent sample t-tests. To accomplish aim 2, associations between growth rate and HRs were assessed through multiple linear regression adjusted for age and height. To accomplish aim 3, pre- and post- fatigue HRs were compared within subjects using paired t-tests. The association between muscular fatigability and growth rate was assessed using linear regression. Results: In aim 1, male and female groups differed significantly in height, age, and gait speeds. HRs improved with age for females at C7AP at all speeds pre-fatigue and at C7V in SWS and PWS post-fatigue. Males’ HRs increased with age during FWS pre-fatigue at C7V, C7AP , and L5ML . Females had a significant negative association between height and HR post-fatigue at C7V during both SWS and PWS, and at C7AP during FWS. In aim 2, male and female groups differed significantly in height, but not in age, growth rate (GR), walking speeds, or average HRs. When accounting for age and height, GR over a four-month period was a significant linear predictor of smoothness of trunk motion only for females during fast walking at L5AP. In aim 3, Females showed a significant effect of fatigue at SWS and at PWS on smoothness of motion of the lower trunk. Males showed a significant effect of fatigue during FWS at C7 in all planes of motion. Conclusions: These findings overall suggest substantial sex differences in changes to smoothness of trunk motion during gait in adolescents and in the effects of fatigue on trunk smoothness. In aim 1, several HRs improved with age in both sexes, but benefits were eliminated with fatigue in males. Aim 2 suggests that physical growth does not have immediate impacts on HR in adolescence. The results of aim 3 show substantial differences between the sexes in how muscular fatigue impacts gait stability. Males were most affected by fatigue at the upper trunk, particularly at FWS, while females were most affected by fatigue at the lower trunk at PWS.