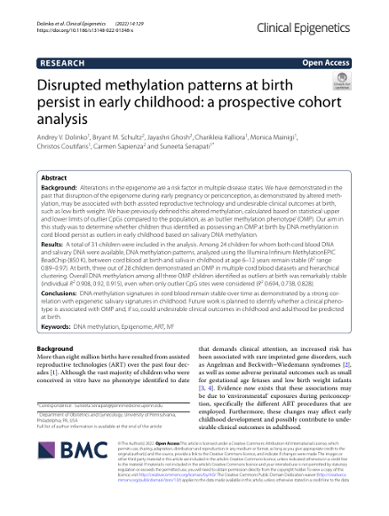 Background: Alterations in the epigenome are a risk factor in multiple disease states. We have demonstrated in the past that disruption of the epigenome during early pregnancy or periconception, as demonstrated by altered methylation, may be associated with both assisted reproductive technology and undesirable clinical outcomes at birth, such as low birth weight. We have previously defined this altered methylation, calculated based on statistical upper and lower limits of outlier CpGs compared to the population, as an ‘outlier methylation phenotype’ (OMP). Our aim in this study was to determine whether children thus identified as possessing an OMP at birth by DNA methylation in cord blood persist as outliers in early childhood based on salivary DNA methylation. Results: A total of 31 children were included in the analysis. Among 24 children for whom both cord blood DNA and salivary DNA were available, DNA methylation patterns, analyzed using the Illumina Infinium MethylationEPIC BeadChip (850 K), between cord blood at birth and saliva in childhood at age 6–12 years remain stable (R2 range 0.89–0.97). At birth, three out of 28 children demonstrated an OMP in multiple cord blood datasets and hierarchical clustering. Overall DNA methylation among all three OMP children identified as outliers at birth was remarkably stable (individual R2 0.908, 0.92, 0.915), even when only outlier CpG sites were considered (R2 0.694, 0.738, 0.828). Conclusions: DNA methylation signatures in cord blood remain stable over time as demonstrated by a strong correlation with epigenetic salivary signatures in childhood. Future work is planned to identify whether a clinical phenotype is associated with OMP and, if so, could undesirable clinical outcomes in childhood and adulthood be predicted at birth.