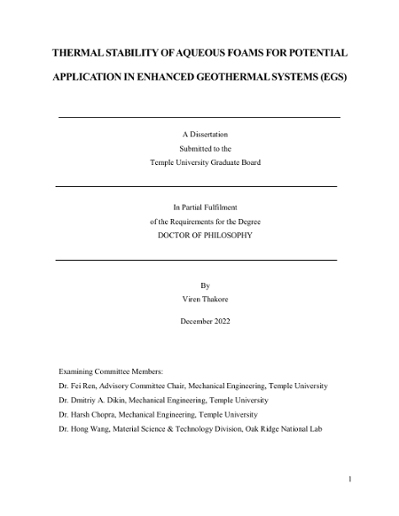 Traditionally geothermal energy utilizes naturally occurring steam or hot water trapped in permeable rock formations through naturally occurring extraction wells or by implementing the hydraulic fracturing process by fracturing rock formations with water-based fracturing fluids. In contrast, in Enhanced Geothermal System (EGS) hydraulic fracturing process is utilized to create new or reopen existing fractures by injecting high-pressure fluid into deep Hot Dry Rocks (HDR) under carefully controlled conditions. Fracturing fluids are usually water-based that utilize an immense quantity of water. In EGS, they are essential for conducting hydraulic fracturing which bring the concern of technical approach and environmental impact. Thus, an alternative approach is to use waterless fracturing technologies, such as foam-based fracturing fluid. Foams are a complex mixture of the liquid and gaseous phases, where the liquid phase act as an ambient phase and gas is the dispersed phase. Foam fracturing fluids offer potential advantage over conventional water-based fracturing fluids, including reduced water consumption and environmental impact. Although foam-based fracturing has shown promising results in oil and gas industries, its feasibility has not been demonstrated in EGS conditions that usually involve high temperature and high pressures. One potential barrier to utilizing foam as fracturing fluid in EGS applications is that foams are thermodynamically unstable and will become more unstable with increasing temperature due to phenomena such as liquid drainage, bubble coarsening, and coalescence. Therefore, it is essential to stabilize foam fluids at high temperatures for EGS related applications such as fracking of HDRs. This project aims to evaluate the thermodynamic behavior of foams at high temperature and high pressure conditions closely resembling the geothermal environment. In this research, foam behavior was categorized as foam stability based on its half-life, i.e., the time taken by the foam to decrease to 50% of its original height. A laboratory apparatus was constructed to evaluate the foam half-life for a temperature range of room temperature to 200°C and a pressure range of ambient pressure to > 1000 psi. Two types of dispersed/gaseous phases, nitrogen gas (N2) and carbon dioxide gas (CO2), were investigated. Four different types of commercial foaming agents/surfactants with various concentrations were tested, including alfa olefin sulfonate (AOS), sodium dodecyl sulfonate (SDS), TergitolTM (NP – 40), and cetyltrimethylammonium chloride (CTAC). Moreover, five stabilizing agents, guar gum, bentonite clay, crosslinker, silicon dioxide nanoparticles (SiO2), and graphene oxide dispersions (GO), were also added to the surfactants to enhance foam stability. Experimental results showed that N2 foams were more stable than CO2 foams. It was observed that foam half-life decreased with the increase in temperature. Among all the surfactants, AOS foams showed the most promising thermal stability at high temperatures. Moreover, with the addition of stabilizing agents, foam's half-life was enhanced. Stabilizing agents such as crosslinker and GO dispersion showed the most stable foams with half-life recorded at 20 min and 17 min, respectively, at 200°C and 1000 psi. Finally, pressure also showed a positive effect on foam stability; with increased pressure, foam half-life was increased. Based on the experimental data, analytical models for the effect of temperature and pressure were developed, considering foam degradation is a first-order kinetic reaction that linearly depends on the foam drainage mechanism. The effect of temperature on foam half-life was studied as an exponential decay model. In this model, foam half-life is a function of drainage rate constant (DA) and activation energy (Ea) of the foam system. The effect of pressure on foam half-life was found to obey a power-law model where an increase in pressure showed an increase in foam half-life. Furthermore, a linear relation was studied for the effect of pressure on foam activation energy and drainage rate. Then the, combined effects of temperature and pressure were studied, which yielded an analytical model to predict the foam stabilities in terms of half-life for different foam compositions. This research indicates that with an appropriate selection of surfactants and stabilizing agents, it is possible to obtain stable foams, which could replace conventional water fracturing fluid under EGS conditions.