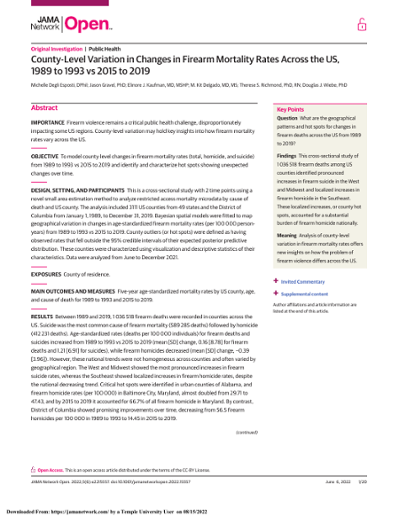 Importance: Firearm violence remains a critical public health challenge, disproportionately impacting some US regions. County-level variation may hold key insights into how firearm mortality rates vary across the US. Objective: To model county-level changes in firearm mortality rates (total, homicide, and suicide) from 1989 to 1993 vs 2015 to 2019 and identify and characterize hot spots showing unexpected changes over time. Design, Setting, and Participants: This is a cross-sectional study with 2 time points using a novel small area estimation method to analyze restricted access mortality microdata by cause of death and US county. The analysis included 3111 US counties from 49 states and the District of Columbia from January 1, 1989, to December 31, 2019. Bayesian spatial models were fitted to map geographical variation in changes in age-standardized firearm mortality rates (per 100 000 person-years) from 1989 to 1993 vs 2015 to 2019. County outliers (or hot spots) were defined as having observed rates that fell outside the 95% credible intervals of their expected posterior predictive distribution. These counties were characterized using visualization and descriptive statistics of their characteristics. Data were analyzed from June to December 2021. Exposures: County of residence. Main Outcomes and Measures: Five-year age-standardized mortality rates by US county, age, and cause of death for 1989 to 1993 and 2015 to 2019. Results Between 1989 and 2019, 1 036 518 firearm deaths were recorded in counties across the US. Suicide was the most common cause of firearm mortality (589 285 deaths) followed by homicide (412 231 deaths). Age-standardized rates (deaths per 100 000 individuals) for firearm deaths and suicides increased from 1989 to 1993 vs 2015 to 2019 (mean [SD] change, 0.16 [8.78] for firearm deaths and 1.21 [6.91] for suicides), while firearm homicides decreased (mean [SD] change, −0.39 [3.96]). However, these national trends were not homogeneous across counties and often varied by geographical region. The West and Midwest showed the most pronounced increases in firearm suicide rates, whereas the Southeast showed localized increases in firearm homicide rates, despite the national decreasing trend. Critical hot spots were identified in urban counties of Alabama, and firearm homicide rates (per 100 000) in Baltimore City, Maryland, almost doubled from 29.71 to 47.43, and by 2015 to 2019 it accounted for 66.7% of all firearm homicide in Maryland. By contrast, District of Columbia showed promising improvements over time, decreasing from 56.5 firearm homicides per 100 000 in 1989 to 1993 to 14.45 in 2015 to 2019. Conclusions and Relevance: There was substantial variation in rates and changes in firearm deaths among US counties. Geographical hot spots may be useful to inform targeted prevention efforts and local policy responses.