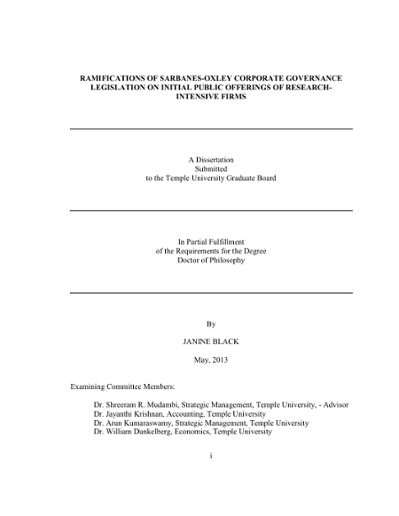 The Sarbanes-Oxley (SOX) Act of July 2002 was created to address the financial malfeasance revealed during the investigations of several large firms by the Securities and Exchange Commission (SEC). The Act required public companies traded on U.S. exchanges to provide increased transparency in financial statements. Key portions of the legislation required firms to create internal financial controls and placed personal accountability with top executives. SOX mandated and standardized a greater degree of self-regulation. In the years following SOX, firms experienced significantly higher compliance costs, but they also benefited from the reduction of statement errors and fraud, increased accuracy in reporting, and greater investor confidence. After the Sarbanes-Oxley (SOX) Act of 2002, anecdotal evidence suggested that SOX impeded small, research intensive firms. We looked at research intensive firms going public before and after SOX to determine if there was a change in volume and quality of research intensive firms post-SOX. We found that firms that went public after SOX were fewer and had lower patenting activity. In the case of small and medium size firms, the cost of SOX compliance is likely to divert funds from research investments. We speculate that highly research intensive firms are more likely post-SOX to divert their IPO to non-U.S. exchanges, delay going public, or dismiss the idea of going public, as proposed in a “3Ds” model. The 2002 SOX US Congressional Act levied millions of dollars in new compliance costs on each foreign or domestic firm that went public on U.S. exchanges. Funding for regulatory expenditures must come from somewhere. We proposed that one likely candidate was research budgets, as research efforts have a more distant, less immediately visible, long term effect on firm performance. We suggested that large firms more easily absorbed the additional costs of SOX with a reduced effect on research and development budgets, while small firms were less able to maintain research budgets after SOX. In the aftermath of SOX, research spending did go down, most visibly in Biotech and Electronics. As the total number of IPO firms decreased dramatically after SOX, these two research intensive industries, plus Computer Software, were the only industries with a large enough sample size to evaluate. We saw that research intensive firms diminished dramatically, along with many non-research intensive firms, from IPO events after SOX. Where we had sufficient sample size, in computer software, biotechnology, electronics, and “other”, we noted that research-intensive firms generally resisted the temptation to raid research budgets, finding funding for compliance elsewhere within the company or from the additional cash flow at time of IPO. Where firms did appear to greatly reduce research budgets was in the non-research intensive industries, where research budgets might be more of a discretionary expense. Firm size was not a factor in whether research intensive firms could better absorb the costs of SOX, although smaller firms tended to spend proportionally more on research in an effort to grow faster. After the enactment of SOX, we observed an indication that the markets valued research intensity even more than prior to SOX, perhaps understanding the vulnerability of research budgets being diverted to compliance costs. Overall, the data suggested that the effect of SOX was underestimated in this study, as the firms that were deterred from going public on U.S. exchanges were not in the sample evaluated. We only analyzed those firms prepared to accept the higher costs of SOX. The data set consisted of survivors, selected firms still willing to pay for SOX compliance as well as for research programs.