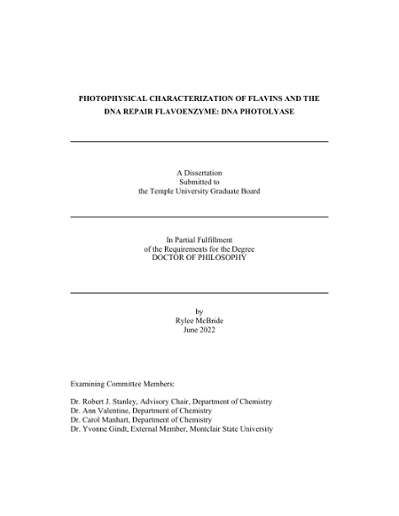 Cofactors are required by many enzymes for catalysis and have been a target of research to better understand enzymatic reactivity and mechanisms. A specific class of enzymes, flavoproteins, bind flavin to facilitate reactions in vivo. Flavoenzymes are involved in a wide range of biological processes, including phototropism, cellular signaling and nitrogen fixation. Flavins are blue-light absorbing chromophores with rich redox activity, found in three redox states, and have the ability to transfer one or two electrons, which is crucial to its reactivity in most flavoproteins. Biologically, the most important are riboflavin (vitamin B2), flavin mononucleotide (FMN), and flavin adenine dinucleotide (FAD), the latter two which are utilized as catalytic cofactors in enzymes. The photochemistry and photophysics of flavins are of interest, mainly because some flavoproteins are light-activated. The intrinsically fluorescent nature of oxidized flavins (flavoquinones) are well-established, with considerable emission both in proteins and in solution. While the two electron-reduced flavohydroquinone (HQ) is emissive in proteins to varying degrees, there is debate over whether they demonstrate detectable fluorescence emission. One argument for their lack of fluorescence is that reduced flavins undergo an ultrafast conformational rearrangement from a bent to a planar ground state, therefore emission is not likely. Reduced flavin studies are often troubled with artifactual data, often due to facile formation of photodegradation products. To elucidate the true nature of reduced flavin fluorescence emission in solution, steady-state spectroscopic studies of photoreduced FMN were performed. No reduced emission spectrum was detected and an upper limit to the fluorescence quantum yield was estimated to be at least 3 orders of magnitude lower than that of oxidized flavin. Structurally-biased flavins, towards and away from the bent, reduced-like geometry, were explored for comparison. Recent excited state dynamic studies by our group revealed that photoexcitation of a modified FAD resulted in significant triplet formation, when compared to FAD. The mechanism of photoreduction occurs from the triplet state, so it was hypothesized that this modified FAD would readily undergo photoreduction, when compared to FAD. The protonation step of the photoreduction at higher pH created a kinetic bottleneck slowing the photoreduction of both flavins. As was described for FMN, no reduced fluorescence emission was observed. Most flavin-dependent enzymes utilize FAD (~75%) rather than FMN (~25%) as the cofactor. One fascinating example of a light-activated flavoenzyme is the DNA repair enzyme, DNA photolyase (PL). PLs repair photocyclized products of DNA, or cyclobutane pyrimidine dimers (CPDs), which can result from the absorption of UV-light. In the presence of photolyase, the CPD is base flipped out of the double helix for access and repair of the damaged DNA. For DNA repair to occur, DNA photolyase binds the dimer substrate and repairs it via photoinduced electron transfer (PET). The rate of this process is exponentially dependent on temperature, as described by the Marcus equation. Interestingly, this enzyme has been isolated from organisms that survive at thermal extremes, found not only in thermophiles, but psychrophiles as well. While the protein sequence and light-harvesting antenna chromophore of DNA photolyases vary by species, the catalytic FAD cofactor is conserved, making this a model protein to understand protein adaptations. The thermal stability of PLs was addressed by determining the melting temperature, specifically the release of the catalytic and antenna cofactors, via fluorescence spectroscopy. As hypothesized, mesophilic proteins have lower thermal stability than thermophiles, but to explain this further protein-cofactor interactions and bulk protein structures were analyzed. Through use of a fluorescent-nucleobase analog (2-Aminopurine, 2-Ap) complementary to the CPD, fluorescence spectroscopy can be used to characterize DNA binding, along with the environment near the DNA binding site and the extent to which the DNA is distorted. These protein-substrate interactions result in changes in the fluorescence intensity, line shape and emission wavelength. Interestingly, comparison of the mesophilic and thermophilic PLs revealed no changes in emission maxima or line shape, indicative of negligible differences in the environment of the base-flipped 2-Ap. However, the intensity of the mesophilic PL was ~2x higher than that for the thermophile. Although it is difficult to ascribe this difference, as no thermophilic PLs bound to DNA have been resolved, conclusions can be drawn from the literature, revealing that DNA binding is thermodynamically less favorable for the thermophilic PL, with respect to the mesophile. Adaptations are responsible for the functional optimization, even at thermal extremes. This is demonstrated by crystal structure analysis of conserved residue-cofactor interactions and, most interestingly, the flavin-adenine distance, revealing a correlation with growth temperature of the organism. Importantly, both temperature and distance effect the rate of ET and, for PL, adaptations to tune this process is necessary.