Improvising Meaning in the Age of Humans 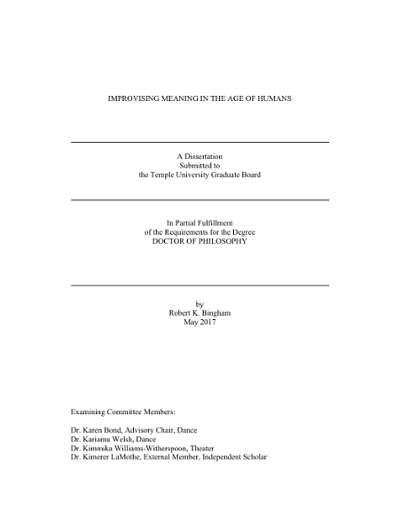 This dissertation is an ecological philosophy rooted in dance as a somatic mode of knowing and as a way of perceiving the world through and as movement. It is phenomenological, drawing meaning from a dedicated practice of improvisational dance and from extensive dialogue with dance and somatics artist/philosopher Sondra Horton Fraleigh. This emergent knowledge is integrated into discourses and practices addressing the relationship of the human and more than human world in the context of a deepening environmental crisis in the 21st century. Employing both somatic and conceptual ways of knowing, I investigate dance as a tool for restoring a sense of ecological kinship with nonhuman co-habitants of planet Earth. The pretext for the dissertation is the emerging concept of the Anthropocene, a term introduced by Paul Crutzen in the early 2000s which defines human activity as the dominant geophysical force affecting the movements of the Earth system, including weather patterns and chemistries of soil, air and water. This concept, while subject to debate both in and out of the sciences, highlights the entanglement of humans and Earth and calls into question anthropocentric notions placing humans at the center of the universe of significance and meaning. In light of growing challenges associated with the Anthropocene, including climate change and mass extinction, the dissertation makes a case for greater inclusion of ecological and environmental contexts in dance studies scholarship as an epistemological move towards increasing reciprocity with Earth. I argue that environmental crisis, while daunting, presents an opportunity for radical creativity in re-thinking the interconnected movements of human bodies and planet Earth. In summer 2015, I conducted a one-month, fieldwork-based interview with Fraleigh, which included verbal dialog, dancing, and exploration of the landscape of southern Utah, where she lives following retirement from university teaching. Fraleigh, whom I had known personally and professionally for twelve years since studying with her as an MFA student in the early 2000s, is a dance artist, philosopher and somatic educator widely known within and outside the academic dance community for her writing and teaching in phenomenology, dance aesthetics, somatics, and butoh. Her decades of inquiry into the nature and meaning of dance and human embodiment have consistently included questions about the relationship of humans and nature, and she has argued that humans are ecological as well as cultural beings. Through collaborative somatic and intellectual processes, we extended questions we shared about the relationship of humans with Earth through its contextualization within the emerging paradigm of the geologic Age of Humans. The dissertation is organized into two parts. Part One describes the onto-epistemological context for the fieldwork I conducted in Utah and includes background literature on the subjects of body, perception, matter and environmental ethics, followed by an explanation of the research methodologies I employed. Part Two is a phenomenological account of the fieldwork, which spirals between thick description of specific experiences and theoretical reflections on emergent meanings. Through this format, I integrate somatic and conceptual ways of knowing and illuminate dance as a mode of meaning making and response to geologic transformations taking place on Earth. By engaging dance as a tool for thinking about and with the Anthropocene, I aim to promote more scholarly inquiry into ways that dance can and does transform, heal, revitalize and aestheticize human-Earth relations in the context of a planet in crisis.