BOVINE BENEFACTORIES: AN EXAMINATION OF THE ROLE OF RELIGION IN COW SANCTUARIES ACROSS THE UNITED STATES 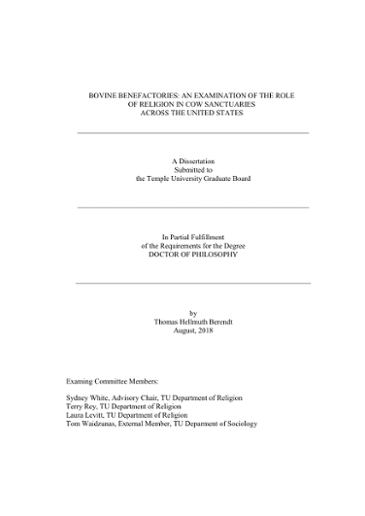 This study examines the growing phenomenon to protect the bovine in the United States and will question to what extent religion plays a role in the formation of bovine sanctuaries. My research has unearthed that there are approximately 454 animal sanctuaries in the United States, of which 146 are dedicated to farm animals. However, of this 166 only 4 are dedicated to pigs, while 17 are specifically dedicated to the bovine. Furthermore, another 50, though not specifically dedicated to cows, do use the cow as the main symbol for their logo. Therefore the bovine is seemingly more represented and protected than any other farm animal in sanctuaries across the United States. The question is why the bovine, and how much has religion played a role in elevating this particular animal above all others. Furthermore, what constitutes a sanctuary? Does not the notion of a sanctuary denote a religious affiliation to salvation and sanctity, and as such are bovines so sacred that they need sanctuaries? Or is it simply that they are so exploited by the livestock industry that they, above all other animals, need salvation? In such a way, this study asks the question, who is the benefactor: the bovine or the human? I highlight that depending upon the motivation the roles can be reversed, so that at a Hindu based cow sanctuary the cow is the benefactor, venerated in gratitude for the numerous gifts it bestows upon us. However, at the Vegan inspired cow sanctuaries it is the human who takes on the role of the “bovine benefactor,” for they are specifically looking to protect and offer bovines sanctuary so that they can lead an autonomous life free from exploitation. I have therefore coined the term “bovine benefactories” to refer not only to the sanctuaries where are they are venerated and protected, but also as an apt juxtaposition to the ‘fear factories’ where the bovines are made to suffer – fear factories being a more figurative name for what the industry labels as CAFOs (concentrated animal feeding operations). At the heart of this study is therefore an emphasis upon the stark juxtapositions and contradictions that Americans have with the bovine. What is deemed holy by one bovine sanctuary is deemed profane by another. At the same time, all bovine sanctuaries stand united in complete contrast to the present-day treatment of bovines within the livestock industry. Furthermore, there is an intriguing juxtaposition between America’s reliance and infatuation with beef and dairy products and their treatment of the bovine. For what is deemed more holy to Americans than the hamburger? As such, I also question whether such a dependence and passion for bovine products is a form of religious expression in itself? This study therefore analyzes to what extent food is deemed sacred to a diverse American public. For example, is the bovine sacred to a secular America because it is their ultimate benefactor? As such, this study looks to deconstruct and question what constitutes bovine veneration, highlighting that the bovine is not only venerated for its virility, aggression, and abundance, but that it has also taken on new significance as a symbol for exploitation, consumerism, and speciesism. In such a way, I highlight that there are many different religious motivations for protecting and offering bovines sanctuary. While some seek to venerate and use the bovine as a symbol, others seek to award the bovine its own autonomy – whereby it is not merely a symbol, but also an animal, with its own identity, will, and purpose beyond that of the human. This work therefore stands squarely on the shoulders of many postmodern and critical theorists that have come before me, from Judith Butler and Rebecca Alpert to Clifford Geertz and David Chidester. Their work has demonstrated that all constructs are limited by presuppositions of what is considered to be the normative – and as such, what is religion and what is deemed sacred is relative to both the individual and the community that one seeks to identify with. In such a way, I shall conclude that the largescale rearing of bovine, the mass producing and consuming of beef and dairy products, and indeed the offering of sanctuary to the bovine can all be analyzed and interpreted as unique, and at the same time intertwined, forms of religious expression and practice.