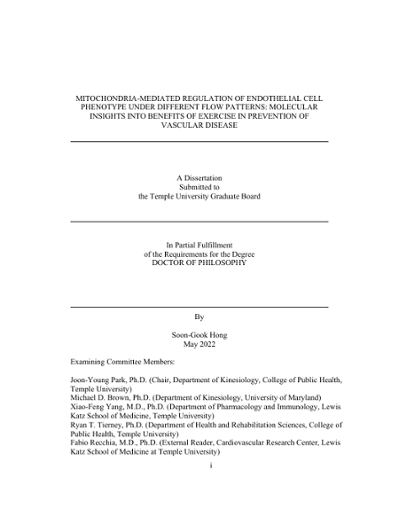 Chapter 1: Molecular Mechanism of Mitochondrial Fragmentation and Glucose Metabolism under Disturbed Flow in Endothelial Cells: Focus on the Role of Dynamin-Related Protein 1. The luminal surface of the endothelium is continually exposed to dynamic blood flow patterns that is known to alter immunometabolic phenotypes of the endothelial cells (ECs). Recent literature reported that inhibition of the metabolic reprogramming to glycolysis or enhancement of oxidative phosphorylation (OXPHOS) is considered as an effective strategy to prevent EC proinflammatory activation and eventually the progression of vascular diseases. Endothelial mitochondria are highly dynamic organelles playing versatile roles in maintaining endothelial cell homeostasis working as bioenergetic, biosynthetic, and signaling organelles. The balance between fusion and fission processes modulates mitochondrial network, which is essential for maintaining mitochondrial homeostasis. Disruption of the orchestrated balance, especially toward excessive fission resulting in fragmented and dysfunctional mitochondria, has been shown to be associated with atheroprone phenotypes of ECs. However, there is a key knowledge gap with respect to morphology of EC mitochondria under different flow conditions and its role on EC immunometabolic phenotypes.In chapter 1, the purpose of this study was to investigate the effect of different flow patterns on mitochondrial morphology in ECs and its implication in immunometabolic endothelial phenotype. The overarching hypothesis of the Chapter 1 was that disturbed flow (DF) will increase mitochondrial fragmentation, which will facilitate glycolysis and inflammatory activation in ECs. In the study, mitochondrial morphology was analyzed in ECs at multiple segments of the aorta and arteries in EC-specific photo-activatable mitochondria (EC-PhAM) mice. Increased mitochondrial fragmentation was observed at atheroprone regions (e.g., lesser curvature of the aortic arch, LC) with increased dynamin-related protein 1 (Drp1) activity, compared with the atheroprotective regions (e.g., thoracic aorta, TA). The atheroprone regions also showed a higher level of endothelial activation and glycolysis. Carotid artery partial ligation surgery, as a surgical model of DF, significantly induced mitochondrial fragmentation with elevated Drp1 activity and increased EC activation. in vitro experiments recapitulated in vivo observations. Inhibition of Drp1 activity by mdivi-1 attenuated the DF-induced atheroprone EC phenotypes, showing the close relationship between mitochondrial morphology and atheroprone phenotypes of ECs. As for the molecular mechanism, hypoxia-inducible factor 1 α (HIF-1α) stabilization and its nuclear translocation was significantly increased under DF, which was attenuated by mdivi-1 treatment. Mitochondrial reactive oxygen species (mtROS) and succinate, which are known to reduce prolyl hydroxylase domain 2 (PHD2) activity thereby increasing HIF-1α stabilization, were significantly elevated under DF, but those were attenuated by mdivi-1 treatment. Finally, a 7-week voluntary wheel-running exercise training significantly decreased mitochondrial fragmentation with a down-regulation of VCAM-1 expression at the LC. In conclusion, our data suggest that DF induces mitochondrial fragmentation with increased Drp1 activity, which is associated with an atheroprone EC phenotype. In addition, regular practice of aerobic exercise reduces mitochondrial fragmentation and prevents ECs from an atheroprone endothelial phenotype at the atheroprone regions. Chapter 2: Molecular Mechanisms for Unidirectional Flow (UF)/Exercise-Induced improvement of Mitochondrial Integrity: Focus on phosphatase and tensin homolog (PTEN)-induced putative kinase 1 (PINK1) /PARKIN-Dependent Mitochondrial Autophagy (Mitophagy) Phosphatase and tensin homolog (PTEN)-induced putative kinase 1 (PINK1) is an essential molecule in the mitophagy process and known to act as a cytoprotective protein involved in several cellular mechanisms in mammalian cells. It has been documented that the loss of PINK1 expression in mice and various cell types enhance susceptibility to stress-induced cell damage, while the overexpression of PINK1 significantly attenuates stress-induced mitochondrial and cellular dysfunction.In chapter 2, the purpose of this study was to investigate PINK1 expression and its subcellular localization under an exercise-mimic laminar shear stress (LSS) condition in human primary endothelial cells and in exercizing mice, and its implications on endothelial homeostasis and cardiovascular disease (CVD) prevention. The overarching hypothesis of the Chapter 2 was that unidirectional flow (UF) will increase cytosolic PINK1 expression through which UF-preconditioned ECs will be more protective against an accumulation of dysfunctional mitochondria via a greater mitophagy induction. In this study, we measured the full-length PINK1 (FL-PINK1) mRNA and protein expression levels in ECs under unidirectional laminar shear stress (LSS). LSS significantly elevated both FL-PINK1 mRNA and protein expressions in ECs. Mitochondrial fractionation assays showed a decrease in FL-PINK1 accumulation in the mitochondria with an increase in the cytosolic FL-PINK1 level under LSS. Confocal microscopic analysis confirmed these subcellular localization patterns suggesting downregulation of mitophagy induction. Indeed, mitophagy flux was decreased under LSS, determined by a mtKeima probe. Mitochondrial morphometric analysis and mitochondrial membrane potential determined by tetraethylbenzimidazolylcarbocyanine iodide (JC-1) showed mitochondrial elongation and increased mitochondrial membrane potential under LSS respectively, suggesting that an elevation of cytosolic PINK1 is not related to an immediate induction of mitophagy. However, increased cytosolic PINK1 elevated mitophagic sensitivity toward dysfunctional mitochondria in pathological conditions. Preconditioned ECs with LSS showed lower mtDNA lesions under angiotensin II stimulation. Moreover, LSS-preconditioned ECs showed rapid Parkin recruitment and mitophagy induction in response to mitochondrial toxin (i.e., carbonyl cyanide chlorophenylhydrazone, CCCP) treatment compared to the control. We measured PINK1 expression at ECs of the thoracic aorta in exercised mice, a physiological LSS-enhanced model, which was significantly elevated compared to sedentary animals. In addition, exercise-preconditioned mice were more protective to angiotensin II-induced mtDNA lesion formation in the mouse abdominal aorta than sedentary mice, suggesting a potential protective mechanism of exercise in a PINK1-dependent manner. In conclusion, LSS increases a cytosolic pool of FL-PINK1, which may elevate the mitophagic sensitivity toward dysfunctional mitochondria or activate other cytoprotective mechanisms in ECs. Our data suggest that exercise may support mitochondrial homeostasis in vascular ECs by enhancing PINK1-dependent cell protection mechanisms.