The Three Jewels of Dr. B.R. Ambedkar: Buddhism from the Margins 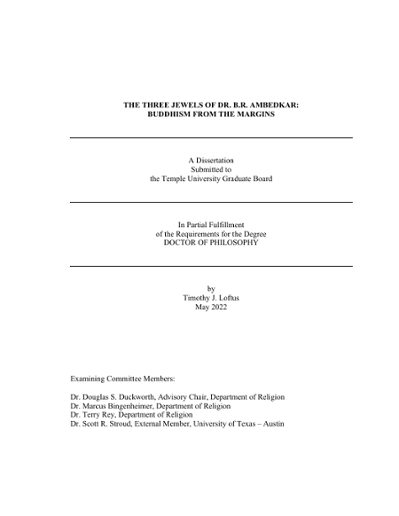 As a South Asian iteration of “modern Buddhism,” Ambedkarite Buddhism’s place in the modern Euro-American Religious Studies academy has been under-articulated and, considering the profile of its founding figure, this absence is conspicuous. By providing a detailed exposition of the unique and defining features of Ambedkarite Buddhism this project aims to address this gap in the literature. B.R. Ambedkar’s position as a Dalit, activist, Columbia University-trained scholar, pragmatist, and Buddhist offers a unique point of departure to re-examine some of the core assumptions about Buddhist approaches to ethics and action in the world. This dissertation aims to articulate a theological (or dharmalogical) framework at work in Ambedkar’s American Pragmatist-inspired, social justice-oriented Buddhism. Inside India, Dr. B.R. Ambedkar is perhaps the single most well-known and revered social justice figure for the oppressed classes of all time, with numerous universities, neighborhoods, roads, foundations, and airports named in his honor. And yet, his profile has remained largely provincial. As a major religious leader in India, Dr. Ambedkar is almost completely obscured by Gandhi’s shadow in the Euro-American mind, yet it was his deep interest in religion and his famous public conversion to Buddhism, along with millions of his followers, that animated so much of his action and continues to inspire his followers today. In his introduction to The Buddha and His Dhamma Ambedkar identified four main problems that, in his view, hindered the Buddhist tradition in its ability to reach its potential as the religion most adapted to modernity. This dissertation is organized around those questions, as Ambedkar framed them. First, Ambedkar was dissatisfied with traditional explanations for the Siddhārtha’s decision to leave his comfortable palace life in pursuit of the life of a renunciate. In place of the psycho-spiritual angst that drives the Siddhārtha found in most traditional source texts, Ambedkar presents Siddhārtha as a socially-motivated renunciate in his Buddha narrative. The second problem relates to the set of teachings commonly known as the “four noble truths.” He sees these teachings as problematic for various reasons, including that, in his view, they lead to nihilism, and he seeks to undermine their authority while offering an alternative frame. The third problem relates to the Buddhist teachings on karma and rebirth. He argues that Brahminical readings of these terms have inflected Buddhist understandings of them and consequently rendered them incompatible with the Buddha’s intended meaning. He seeks to clarify the Buddha’s original intent regarding these terms. The fourth and final problem relates to the community of monks and nuns. Specifically, Ambedkar seeks to rectify an inconsistency he identifies between the social message of the Buddha as he understands it and the inward orientation of the monastic saṅgha as he sees it around the Buddhist world. Ambedkar succeeded in the creation of a pan-Indian anti-caste movement, the likes of which had never before been seen. Instead of rejecting religion completely, as perhaps may be expected of a Western educated, liberal-minded thinker whose disaffection with Hinduism was near total, he instead moved toward it. His enchantment with the Buddha from a young age as the first and most effective anti-Brahminical champion of equality coupled with his sense of the need for a social consciousness to morally orient not only Dalits but all of Indian society inspired him to pragmatically carve out a Buddhism that he found fit for the job.