DOES 2+2 EQUAL 4? AN EVALUATION OF THE IMPACT OF ARTICULATION POLICIES ON TRANSFER GRADUATION RATES IN THE STATE OF FLORIDA 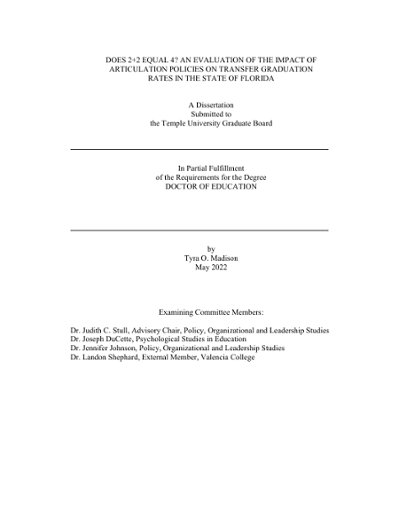 Roughly 40% of first-time freshman enter college at two-year institutions (Ginder, et al., 2015) and between roughly 70 to 80% of students enrolled at two-year institutions report the intent to continue their education to earn a bachelor’s degree (Jenkins & Fink, 2016; U.S. Department of Education, 2001). However, less than half of the percentage of community college students who intend to transfer formally transfer to a four-year institution (Shapiro et al., 2017), and even fewer complete their degrees in a timely manner once enrolled at the receiving institution (Chen, et al., 2019; Berkner, Horn, & Clune, 2000; Bradburn, Hurst, & Peng, 2001). Previous research has found that students who successfully transfer from a two-year to a four-year institution often outright lose credits or discover that degree program equivalent credit does not apply to the selected major during the transfer process (Keith, 1996; Ignash & Townsend, 2000; Simone, 2014; Hodara, Martinez-Wenzl, Stevens, & Mazzeo, 2016). The loss of credits towards a student’s declared field of study has major implications, including limited financial aid eligibility, additional tuition costs due to repeated course work, additional time to degree, and inevitably, delayed opportunities for competitive employment (U.S. Government Accountability Office, 2017). The study focused on Florida and used three states with varying degrees of statewide transfer policies as comparison states (Arizona, New York, Pennsylvania). The study is based on the quantitative analyses of three databases, two of which were federally collected databases and one which was constructed from data collected in this research project. The federal data sets were the Integrated Postsecondary Education Data System (IPEDS) and the National Survey of College Graduates (NSCG). The other project data set, referred to as Florida College and University Surveys (FCUS), was constructed from survey responses from two- and four-year public Florida institutions. The graduation rates of transfer students were higher than those of first-time-in-college students (FTIC). Most students who earned a bachelor’s degree was a transfer student who also reported the earning of an associate’s degree. On a percentage basis, FTIC students earned slightly more bachelor’s degrees in science and engineering fields than transfer students. Transfer students were found to earn a higher percentage of bachelor’s degrees in science and engineering related fields, and non-science and engineering related fields compared to their FTIC counterparts. FTIC students were more likely to earn advanced degrees beyond the bachelor’s degree than transfer students. Based on common transfer metrics commonly used by public two- and four-year state institutions, Florida had the most comprehensive statewide transfer and articulation policies, and New York had the least comprehensive. Quantitative results indicated a strong relationship between the six-year transfer graduation rates and the states and revealed Florida had the lowest graduation rates of transfer students, while Pennsylvania had the highest. Additionally, there was a strong relationship between the six-year transfer graduation rates of Pell Grant eligible transfer students and the states, nonetheless, the graduation rates of Pell Grant eligible transfer students were measurably lower than the overall population of transfer students. Quantitative results indicated Florida and Arizona transfer graduation rates differed significantly at the .05 level. It was found that transfer-in rate and percent of full-time enrollment negatively impacted transfer students’ graduation rates. These findings provide insight to the completion rates of transfer students in states with varying levels of statewide transfer and articulation policies. Further research should examine the extent to which individual transfer policies have on student outcomes, such as locally established major/program-based institution-to-institution agreements. Additionally, to gain a deeper understanding of the variables that have a relationship with transfer student outcomes, further research should investigate the differences in the interpretation and implementation of transfer and articulation policies between the states.