THE IMPACT OF ADJUSTED EARNINGS PRACTICES ON FIRM PERFORMANCE 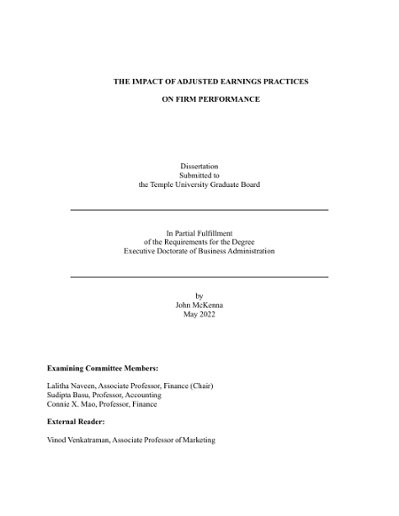 “Show me the incentive and I will show you the outcome”. Charlie Munger The use of adjusted earnings as a presentation alternative to GAAP earnings is intended to help financial statement users understand the underlying performance of a company. The approach is highly prevalent and growing in frequency and adjustment magnitude, as “by 2017, for example the average adjustment per firm was 26 cents per share or about 15% of average GAAP earnings per share” (Rouen, So, and Wang, 2020, p. 3). While some adjustments are standard adjustments for non-recuring items like accounting rule changes, or part of a set of consistently communicated recurring items, there is another group of adjustments that are infrequent, subject to considerable management latitude and often inconsistently categorized. Across the range of academic research on this phenomenon, there are questions regarding management motivation, communication clarity and persistence of these non-GAAP adjustments. There is a broader question regarding business decision rigor, and quality of earnings versus peers for those firms with a large adjusted to reported earnings difference. In Chapter 3, I assess the consequences of the use of Adjusted Earnings, by testing whether the size of the difference between reported and adjusted earnings is associated with a difference in performance against a set of key firm performance measures. The underlying hypothesis is that firms with a large adjusted-earnings differential have weaker underlying operational performance, compared to their peers and that ultimately the decisions and adjustment actions being taken (e.g., more acquisitions, business reorganizations or “one-offs”) that drive up the earnings adjustment subsequently erode performance. The study of a set of large New York Stock Exchange (NYSE) listed companies over a ten-year period (2011 through 2020) showed that firms with large adjusted-earnings differentials had statistically significant performance gaps versus peers that had smaller earnings adjustments on return on assets (ROA) and return on equity (ROE), both contemporaneously and prospectively. There were also performance differences in current year total shareholder return (TSR), although that was mostly a short-term phenomenon and did not hold for future TSR. The study results were particularly significant for the operational measure return on assets (ROA). The tests controlled for firm sector, size and leverage ratio. In Chapter 4, I examine whether CEO incentive compensation (total current year variable pay, variable pay as a percentage/fraction of total compensation, and unvested equity) is a possible cause of the expanded use of Adjusted Earnings practices, and associated with the size of the difference between adjusted and reported earnings. The hypothesis for this follow-on study was that CEO incentives are enhanced by a higher adjusted earnings number, given the typical structure of incentive plans and thus they could influence higher adjusted-earnings differentials. The literature is mixed on this topic as some studies like Black, Black, Christensen and Gee (2021) show no significant relationship between CEO pay and aggressive non-GAAP earnings reporting, while others show that large positive non-GAAP earnings adjustments predict abnormally high CEO Pay (Guest, Kothari and Pozen, 2017). Cohen, Dey and Lys (2008) found that unexercised options were positively associated with income-increasing accrual-based earnings management activities, but that activity is not necessarily impacting reported performance measures (p. i). This second study, found only partial statistical support for the hypothesis that current year variable compensation was associated with the Adjusted Earnings differential, but it was inconclusive. There was statistical significance for the tests of the variable compensation ratio and total unvested equity being related to future adjusted earnings differentials, but those findings were at a relatively low significance level.