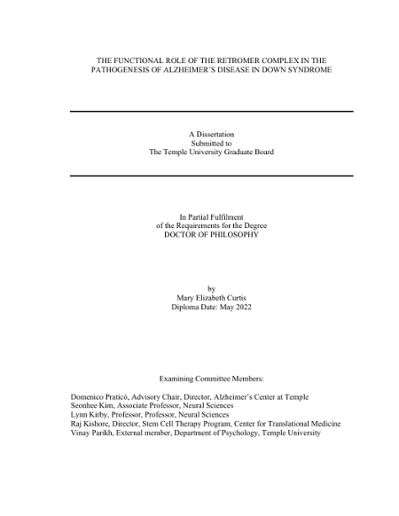 Down syndrome (DS) is a congenital disorder caused by partial or complete triplication of human chromosome 21. By age 40, nearly all individuals with DS develop amyloid beta (Aβ) plaques and tau neurofibrillary tangles, the pathological hallmarks of Alzheimer’s disease (AD). This increased susceptibility to Alzheimer’s Disease in Down syndrome (AD-DS) has primarily been attributed to an over-dosage of the amyloid precursor protein (APP), which generates neurotoxic Aβ fragments when cleaved by β- secretase. However, the complete molecular mechanisms of AD-DS are not completely understood, as trisomy of chromosome 21 can induce AD-like neuropathology independently of APP triplication. In addition to classical AD neuropathology, enlarged, APP-positive early endosomes appear early in AD-DS pathogenesis and are the first site of Aβ accumulation. In AD, these endocytic abnormalities have been linked to dysfunction of the endosomal-sorting system known as the retromer complex. Mechanistically, retromer dysfunction can influence amyloid beta production by increasing interaction of the retromer cargo APP with beta-secretase. However, recent studies have also implicated the retromer complex in the development of tau pathology, both through regulation of tau phosphorylation and degradation via lysosomes. Given that retromer dysfunction is associated with the endosomal phenotype found in AD-DS, and that the retromer system can modulate key aspects of AD-DS neuropathology, the objective of the current study is to investigate the role of the retromer complex in the development of AD-DS. We first examined the retromer system in cortices and hippocampi from human patients with DS. Retromer recognition core proteins were significantly decreased in both the hippocampi and cortices of young and aged DS subjects compared to controls. Correlative analyses showed a significant inverse relationship between recognition core proteins and levels of soluble forms of Ab 1-40 and 1-42 in both hippocampus and cortex tissue, and phosphorylated tau epitopes PHF1 and PHF13 in the cortex of the same patients. While this does not indicate causation, these correlative analyses support the hypothesis that dysregulation of the retromer system and AD-like pathology are closely related. Next, we analyzed the retromer system in euploid and trisomic induced pluripotent stem cell (iPSC) -derived neurons and observed an age-related decrease in retromer proteins and elevation of Ab 1-40, Ab 1-42 and phosphorylated tau proteins in trisomic neurons compared to euploid controls. Additionally, we found that pharmacological stabilization of the retromer complex can reduce Ab and phospho-tau in trisomic iPSC-derived neurons. While total levels of retromer proteins are unaffected, we hypothesize that retromer function improves with TPT-172 treatment, as levels of early endosome proteins decrease while autophagy and lysosomal proteins increase with treatment. Treatment of trisomic neurons with TPT-172 also led to reductions in the neuronal tau kinase CDK5 and its activator p25, providing a potential mechanistic link between tau phosphorylation and pharmacological stabilization of the retromer system. Additionally, we examined the effects of genetic overexpression of VPS35, the backbone of the retromer core, in trisomic neurons. We observed similar decreases in AD pathology measures, however, the magnitude of the effect was smaller with genetic overexpression than with pharmacological stabilization using TPT-172. We hypothesized that trisomy 21 may can some inherent instability of the retromer system, possibly due to overabundance of retromer cargo protein APP, that is better overcome by enhancing stability of the complex rather than increasing VPS35 protein level via genetic overexpression. To further explore the role of the retromer system in the AD-DS phenotype, we performed a full characterization of cognitive function and the retromer complex at 2, 5, 9 and 12 months of age in the Ts65dn mouse model of DS. While we observed accelerated aging related cognitive and pathological changes in DS mice, we did not observe any protein levels changes in the retromer complex. However, because these mice do develop endosomal dysfunction that could be indicative of retromer dysfunction, we treated mice with TPT-172 from 4 to 9 months of age and examined cognitive function, the retromer system and AD pathology measures. We observed improvements in cognitive function tests and synaptic function in Ts65dn mice receiving TPT-172, as well as reductions in tau pathology, early endosome proteins, and early endosome size. Taken together, these data demonstrate that retromer complex deficiency occurs in human DS and may contribute to the development of AD-like pathology and cognitive decline in AD-DS. Because pharmacological stabilization of the retromer system improves AD-like pathology and cognitive function in models of DS, we conclude the retromer represents a potential therapeutic target for AD-DS.