Kant and the Dual Role of the Imagination: Content, Form, and Judgments of Beauty 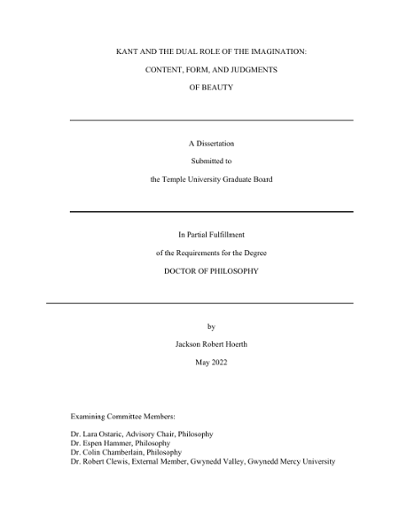 In this dissertation, I argue for a novel interpretation of Kant’s faculty of the imagination. In addition to providing the prepared sensible manifold, I contend that the imagination also demonstrates a formal capacity – the ability to provide its own lawfulness. This position I term the ‘Dual Role of the Imagination,’ as a faculty capable of providing both form and content. Although the imagination’s products remain determined by the understanding in regular cognition, I demonstrate that aesthetic judgments provide instances where the imagination provides its own lawfulness inspired by beautiful objects in nature and fine art. These beautiful objects, when interacting with the free imagination engaged in harmonious play represent distinct points where nature demonstrates certain rational signs, thereby providing opportunity for the imagination to shape its own forms that demonstrate the possibility of rationality within an otherwise disinterested nature. That is, beautiful objects give the imagination the occasion to reflect on and produce a view of nature as if rationally ordered, or in accord with Kant’s Principle of Purposiveness. To fully grasp the value of aesthetic judgment within Kant’s Critical framework, I argue, the imagination must be seen in its formal capacity since only a faculty capable of forming its own lawfulness that also remains tied to sensibility can bridge the gap between nature and reason. Therefore, this project serves as a defense of the imagination as a formal faculty towards the end of bridging the ‘incalculable gulf’ Kant indicates in the introduction to the Critique of the Power of Judgment. In addition to the historical research, I turn to contemporary scholarship on Kant in terms of his aesthetics and its value to his theory of cognition. There are two prevailing approaches to Kantian aesthetics in contemporary scholarship – the cognitive approach and the interpretive approach. In the cognitive approach, aesthetics is viewed in terms of its value to future cognitions. That is, aesthetic judgments are useful insofar as they either deepen future cognitions, provide new connections for our cognitions, or reveal sensible content that goes beyond our existing cognitions. Most proponents of the cognitive approach have little to say about the power of the imagination within Kant’s transcendental framework, seeing it as an appendage to our conceptual faculty, the understanding. This provides a deflationary reading of the imagination since its products are only relevant to cognition and are not necessarily considered the results of a free and independent faculty. The interpretive approach favors an expanded view of the imagination, allowing it to exist free from the determination of the understanding in cases of aesthetic judgment. Supporters of this view consider the products of the imagination as exceeding regular cognition and opening new fields of knowledge beyond what we commonly experience. Examples of these new fields include the political, societal, historical, and aesthetic – domains of knowledge we may consider to be of a different kind than yielded through common cognition. While expanding the imagination, I argue that this view is needlessly inflationary, providing far more avenues for inquiry than Kant intended for the imagination. That is, while the imagination can demonstrate the possibility of nature as rationally ordered, and thereby span the gulf between nature and reason, this perspective is merely one amongst many possible perspectives. It does not privilege or emphasize a view that Kant clearly intended for his aesthetics. Further, I argue, that this expansion of the imagination risks severing it into two distinct faculties, since it requires a hard division between its activities in the First Critique and Third Critique. This dissertation provides a moderate path between the two prevailing approaches in Kantian scholarship. I seek to offer a reading of the imagination in its dual role within Kant’s transcendental framework. Rather than limiting the imagination’s aesthetic activities to cognition or expanding its capacities to obscure their true value, I focus on strengthening the connection between aesthetic judgment and its place as a bridge between nature and reason. I do this through the imagination as a formal, as well as sensible, faculty. On one hand, the imagination maintains its position as a faculty capable of touching the sensible world. On the other, it is capable of forming its own lawfulness inspired by this connection through natural and artistic beauty. As such, it is the imagination that is shown to be key to achieving Kant’s goal of the Third Critique, bridging the ‘incalculable gulf’ – opening a view of nature as amenable to our rational ends.