The Pattern in Securitization and Executive Compensation: Evidence and Regulatory Implications 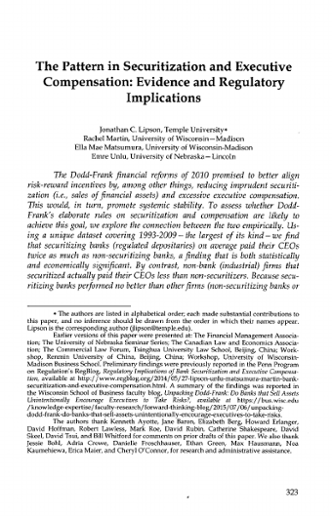 The Dodd-Frank financial reforms of 2010 promised to better align risk-reward incentives by, among other things, reducing imprudent securitzation (i.e., sales of financial assets) and excessive executive compensation. This would, in turn, promote systemic stability. To assess whether Dodd-Frank’s elaborate rules on securitization and compensation are likely to achieve this goal, we explore the connection between the two empirically. Using a unique dataset covering 1993-2009 — the largest of its kind — we find that securitizing banks (regulated depositaries) on average paid their CEOs twice as much as non-securitizing banks, a finding that is both statistically and economically significant. By contrast, non-bank (industrial) firms that securitized actually paid their CEOs less than non-securitizers. Because securitizing banks performed no better than other firms (non-securitizing banks or industrials), we find evidence of agency cost; because bank-originated securitizations performed especially poorly in the financial crisis, we find evidence of social cost. Our findings have important implications for Dodd-Frank, because its rules on securitization and compensation fail to account for the incentive effects of securitization by banks. Its compensation provisions are disconnected from controls on securitization, in particular its risk-retention (“skin in the game”) rules. Moreover, it focuses not on those who “originate” securitizations, such as the banks we study, but instead the “securitizers” who issue securities backed by the financial assets in question. Because banks originated many of the worst securitizations — and yet paid their CEOs more for doing so — Dodd-Frank may be aimed at the wrong segment of securitization. Simpler, better-tailored regulation that accounts for the pattern we observe would more likely achieve Dodd-Frank’s goals of systemic stability and accountability.