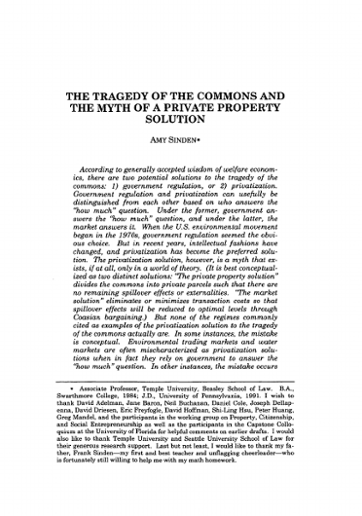 The central question of environmental law is "how much?" How much pollution should we emit into the air and water? How much resource exploitation should we engage in? While for other "how much" questions our society tends to rely (at least in theory) on the market, when it comes to environmental harms, the tragedy of the commons frequently causes the market to fail - that is, to get the "how much" question wrong. According to generally accepted wisdom, there are two potential solutions to the tragedy of the commons: 1) government regulation, or 2) privatization. When the U.S. environmental movement began in the 1970s, government regulation seemed the obvious choice. But in recent years, intellectual fashions have changed, and privatization has become the preferred solution. The privatization solution, however, is a myth that exists, if at all, only in a world of theory. Government regulation and privatization can usefully be distinguished from each other based on who answers the "how much" question. Under the former, government answers the "how much" question, and under the latter, the market answers it. The "privatization solution" to the tragedy of the commons really conflates two distinct solutions. The first - "the private property solution" - involves dividing the commons up into private parcels of property in such a way that there are no remaining spillover effects or externalities between parcels. In this scenario, the tragedy is solved because each individual owner bears the full costs and benefits of her individual decisions (externalities are internalized.) The second solution - "the market solution" requires that transaction costs be eliminated or minimized so that spillover effects across property boundaries will be reduced to optimal levels through Coasian bargaining. None of the regimes commonly cited as examples of the privatization solution to the tragedy of the commons actually are. In some instances, the mistake is conceptual. Environmental trading markets and water markets are often mischaracterized as privatization solutions when in fact they rely on government to answer the "how much" question. In other instances, the mistake occurs in the application of the theoretical concept to the circumstances likely to exist in the real world. Thus, proposed privatization regimes involving land, oceans, and wildlife could conceivably meet the conditions for the private property or market solutions in a theoretical world, but the dynamics of ecological degradation are such that it is impossible for those idealized conditions to be met, or even reasonably approximated, in the real world.