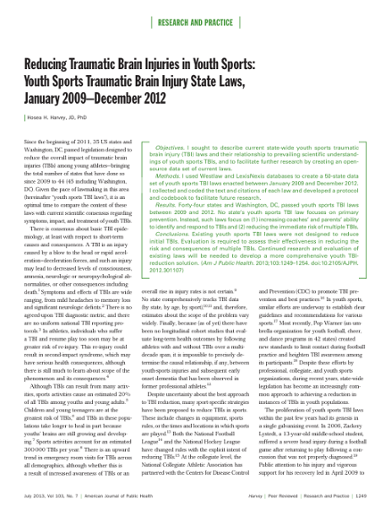 Objectives. I sought to describe current state-wide youth sports traumatic brain injury (TBI) laws and their relationship to prevailing scientific understandings of youth sports TBIs, and to facilitate further research by creating an open-source data set of current laws. Methods. I used Westlaw and LexisNexis databases to create a 50-state data set of youth sports TBI laws enacted between January 2009 and December 2012. I collected and coded the text and citations of each law and developed a protocol and codebook to facilitate future research. Results. Forty-four states and Washington, DC, passed youth sports TBI laws between 2009 and 2012. No state’s youth sports TBI law focuses on primary prevention. Instead, such laws focus on (1) increasing coaches’ and parents’ ability to identify and respond to TBIs and (2) reducing the immediate risk of multiple TBIs. Conclusions. Existing youth sports TBI laws were not designed to reduce initial TBIs. Evaluation is required to assess their effectiveness in reducing the risk and consequences of multiple TBIs. Continued research and evaluation of existing laws will be needed to develop a more comprehensive youth TBI-reduction solution.

This paper describes the current state of laws across the United States aimed at combatting concussions, commonly referred to as “traumatic brain injuries” or TBIs, among young athletes. Since 2009, 47 states and Washington, DC, have passed legislation designed to reduce the long-term consequences of TBIs in youth sports. The authors, led by Hosea H. Harvey, JD, raise concerns about the relationship between the state-level youth sports TBI laws and current public health knowledge and practice. According to the study, the laws generally adhere to the framework in the Lystedt law, which follows a secondary prevention model aimed at avoiding re-injury. Individuals who suffer TBIs and resume play too soon may be at greater risk of second-impact syndrome, which may have serious health consequences. The Lystedt law outlines three core elements to prevent secondary concussions: annual education for athletes and parents, mandatory removal from play for athletes suspected of having concussions, and clearance by a designated health professional before a concussed athlete can return to play. The study finds the most common elements of youth sports TBI laws include a minimum 24-hour mandatory removal from play, required assessment from a health professional before an athlete can return to play, training for coaches on concussion management, yearly information sheets for parents and youth athletes, and clauses that waive liability for certain parties. It suggests that these state-based laws are only part of a comprehensive youth sports TBI-prevention framework. Additional actions, such as changing sports rules, utilizing equipment technology, and identifying better education programs, could be taken to bolster efforts at preventing TBIs in youth athletes.