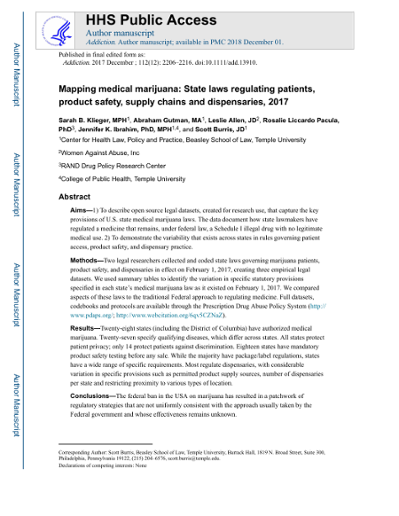 Aims: (1) To describe open source legal data sets, created for research use, that capture the key provisions of US state medical marijuana laws. The data document how state lawmakers have regulated a medicine that remains, under federal law, a Schedule I illegal drug with no legitimate medical use. (2) To demonstrate the variability that exists across states in rules governing patient access, product safety and dispensary practice. Methods: Two legal researchers collected and coded state laws governing marijuana patients, product safety and dispensaries in effect on 1 February 2017, creating three empirical legal data sets. We used summary tables to identify the variation in specific statutory provisions specified in each state's medical marijuana law as it existed on 1 February 2017. We compared aspects of these laws to the traditional Federal approach to regulating medicine. Full data sets, codebooks and protocols are available through the Prescription Drug Abuse Policy System (http://www.pdaps.org/; Archived at http://www.webcitation.org/6qv5CZNaZ on 2 June 2017). Results: Twenty-eight states (including the District of Columbia) have authorized medical marijuana. Twenty-seven specify qualifying diseases, which differ across states. All states protect patient privacy; only 14 protect patients against discrimination. Eighteen states have mandatory product safety testing before any sale. While the majority have package/label regulations, states have a wide range of specific requirements. Most regulate dispensaries (25 states), with considerable variation in specific provisions such as permitted product supply sources number of dispensaries per state and restricting proximity to various types of location. Conclusions: The federal ban in the United States on marijuana has resulted in a patchwork of regulatory strategies that are not uniformly consistent with the approach usually taken by the Federal government and whose effectiveness remains unknown.

Scott Burris and a team of researchers from the Temple University Center for Public Health Law Research and the RAND Drug Policy Research Center analyzed the characteristics of each state’s laws using data from the Prescription Drug Abuse Policy System. The study finds that the laws in 27 states and Washington, DC, addressing medical marijuana mimic some aspects of federal prescription drug and controlled substances laws, and regulatory strategies used for alcohol, tobacco and traditional medicines. Findings include:Only 14 states protect patients from discrimination. While the majority of states with medical marijuana laws have packaging and labeling requirements for medical marijuana products, the laws vary widely in what they require. For example, only 18 states have made product safety testing mandatory. Dispensaries are regulated in 25 states, but only 21 restrict where a dispensary may be located. State laws disparately regulate patient registration and civil rights, product safety labeling and packaging, and dispensaries, creating a patchwork of regulatory strategies whose effectiveness remains unknown.

Wiley
This is the peer reviewed version of the following article, which has been published in final form at https://doi.org/10.1111/add.13910. This article may be used for non-commercial purposes in accordance with Wiley Terms and Conditions for Use of Self-Archived Versions.