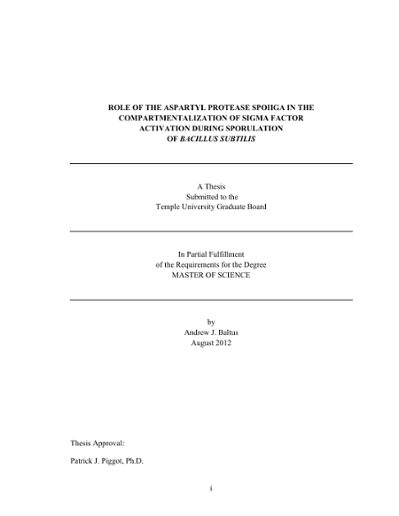 Sporulation in Bacillus subtilis is triggered by starvation for carbon and nitrogen sources. The process of endospore formation involves a highly orchestrated program of gene expression resulting in morphological change. A key early event is the asymmetric sporulation division, which yields the smaller prespore and larger mother cell. The transcription factor σF becomes active in the prespore, and directs the transcription of approximately 50 genes. One of those genes, paramount to this study, is spoIIR. The SpoIIR protein is exported, and localizes to the inter-membrane space of the sporulation septum, which may be mediated directly by SpoIIGA. SpoIIR and SpoIIGA are essential for the activation of σE from its inactive precursor, pro-σE. Pro-σE, encoded by spoIIGB, is part of a two-gene operon that also includes spoIIGA located immediately upstream. SpoIIGA is an integral membrane protein, and is an aspartyl protease that cleaves 27 residues from the N-terminus of pro-σE to yield active σE. The N-terminal portion of SpoIIGA contains five membrane-spanning hydrophobic domains. The C-terminal portion lies within the mother cell cytoplasm, and contains the proteolytic domain with residue D183 acting as the catalytic aspartate. Activation of the proteolytic domain of SpoIIGA is dependent on signaling through SpoIIR at the septum. The interaction with SpoIIR is thought to cause a conformational change in the proteolytic domain of SpoIIGA, which activates it. Normally, σE only becomes active in the mother cell. The current model for σE compartmentalization suggests that before septation SpoIIGA is evenly distributed throughout the entire cell membrane. Once septation occurs, there is a higher amount of SpoIIGA in the mother cell than in the prespore. SpoIIGA is then concentrated in the septum and the mother cell outcompetes the prespore for the limited amount of SpoIIR available. We are investigating the role of SpoIIGA in compartmentalization of σE. To accomplish this, a spoIIGA-gfp translational fusion was used. The fusion was introduced into a B. subtilis SpoIIGA mutant (SpoIIGA49) that lacks functional SpoIIGA because of a point mutation, G100R. The mutation is located within the fourth membrane-spanning domain. The spoIIGA-gfp fusion was also introduced into a spoIIGA knockout strain (spoIIGA-null) in order to assess the effect of SpoIIGA-GFP on sporulation without influence from SpoIIGA-G100R. The SpoIIGA49 strain that expressed spoIIGA-gfp in the prespore from the σF-directed promoter, PspoIIQ showed a weak GFP signal in the prespore, and restored sporulation to parental levels. The same fusion also showed a weak prespore GFP signal in the spoIIGA-null background, however sporulation was not restored. This result suggests that the fusion protein could interact with SpoIIGA-G100R across the septum through SpoIIR, restoring proteolytic activity to SpoIIGA-G100R. In both cases, fluorescence was only detected after σE had become active. Expression of spoIIGA-gfp from its natural promoter also largely complemented SpoIIGA49, but only partially complemented spoIIGA-null. Again, GFP fluorescence was weak, and was only detected after σE had become active. Possible explanations for the poor fluorescence are: 1, GFP function is impaired. 2, SpoIIGA-GFP is present at low levels. To assess the amount of protein present, western blot analysis was performed using anti-GFP antibodies. The results indicated weak expression. When spoIIGA-gfp was expressed from PspoIIG, protein was detected two hours after entry into stationary phase (T2), which was before GFP fluorescence was detected, with or without SpoIIGA-G100R. Detection of SpoIIGA-GFP from PspoIIQ occurred by T4 in with and without influence from SpoIIGA-G100R. Because PspoIIQ requires σF to be active and PspoIIG is active prior to septation, it was expected that SpoIIGA-GFP expressed from PspoIIG would be detected earlier. Weak bands representing SpoIIGA-GFP were observed which suggests low levels of SpoIIGA-GFP. Overall, the PspoIIG promoter appeared to drive more expression of spoIIGA-gfp before septation than PspoIIQ in the prespore alone.